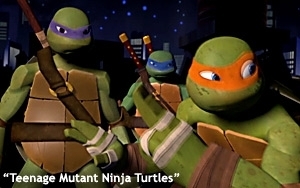 For next season, as part of its strategy to gain more family-targeted advertisers, Nickelodeon is adding three live action series and more animated series for older and young kids, as well as starting up a mobile app for its Nick Jr. brand.

“This will mark the first time we really will market aggressively in the adult [advertising] space with offerings across our entire portfolio,” say Jim Perry, head of advertising sales for Nickelodeon Group, in speaking with Media Daily News. “Research has said kids and parents want to spend more time together -- and they are doing it.”

Nickelodeon says, for example, there is continuing high parents/kids co-viewing in many different programming areas for its older-kids series, “Teenage Mutant Ninja Turtles,” as well as a 53% co-viewing number when it comes to its pre-school Nick Jr. programming.

When it comes to growth of more broader TV marketers, Perry says the retail category was up 20% this past season with Old Navy, Target and Burlington Coat making significant media buys. Nick has also seen travel accounts, insurance companies and a number of auto brands stepping up in a big way, including Toyota and Honda.

After a rough period in the fall of 2011, when Nielsen shocked Nickelodeon with reports of steep viewing double-digit percentage declines, Nickelodeon has slowly come back.

By way of comparison, it’s nearest ad-supported kids TV competitor, Cartoon Network, was down 13% to 950,000 total day viewers in the fourth quarter. Cartoon was down 8% to 1.07 million for the full 2013 years.

What is Nickelodeon’s perspective now on that period?  Cyma Zarghami, president, Nickelodeon Group, told MDN:
“It was an incredibly tumultuous period in time -- for the media landscape, for Nickelodeon, for the kids audience. It was the loudest wake-up call we ever had. We turned the place upside down -- our thinking, our people. And now that we are coming out on the other side, it feels like we worked our butts off and got to a really good place.”

Concerning the current TV ad market, which some analysts describe as weak-to-moderate, Perry says: “It’s a little bit early to call the market. ... Overall we are going to have more GRPs [gross rating points] in the market, which is great for Nickelodeon.”

Estimates are that U.S. advertising revenues for Nickelodeon were at $750 million for 2013.

For next season, new Nickelodeon’s live action shows will include: “Henry Danger," which follows a 13-year-old boy who becomes a part-time sidekick to a super crime fighter; “Bella and the Bullfrogs” (working title), which centers on a head cheerleader who becomes the quarterback of her school's team; and “Nicky, Ricky, Dicky & Dawn," which follows a group of quadruplets.

Three new animated shows will include: “Bad Seeds,” “Pig Goat Banana Cricket” and “Welcome to the Wayne.” For next season, Nick Jr., which targets pre-school children ages 2 to 5, gets its own mobile featuring programs, which will have interactivity and educational elements as well as short-form video. A limited number of TV commercials will play on the Nick Jr. app.

Other new shows will include “Blaze and the Monster Machines” a CG-animated series for preschoolers that focuses on the areas of science, technology, engineering and math, and “Shimmer & Shine,” a new animated series that follows the adventures of fraternal twin genies.

In addition, there will be “Fresh Beat Band of Spies,” an animated series based on a Nick Jr. live-action show.
Nick Jr. still struggles at its traditional TV channel, down 40% for the entire year 2013 to 331,000 total day viewers, although it narrowed loses recently, down 7% in the fourth quarter 2013 to 331,000.