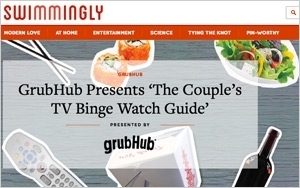 Rather than a night out, HowAboutWe Media and Grubhub are helping couples do what they do best: order in and watch TV.

For the effort, the editorial staff of Swimmingly.com -- HowAboutWe’s publication for couples -- produced a load of editorial-like content.

As the guides are officially “presented by” GrubHub, each suggests a “perfect accompaniment,” from barbequed ribs with “House of Cards” -- fans will know why -- to lasagna and capicola with “The Sopranos.”

For HowAboutWe Media, positioning Grubhub as the ultimate date-night companion is part of a broader media strategy. Founded as a subscription-based dating service, the company now sees native advertising as key to its budding editorial efforts.

“This is our first true foray into native,” Brian Schechter, co-founder and co-CEO of HowAboutWe, said Friday. “By repeating [the model] across our sites, we believe there’s an opportunity for media to become a meaningful part of our business.”

Along with Swimmingly.com, HowAboutWe publishers TheDateReport.com for singles, and the celebrity-focused Famously.com. Adding to its roster, the company also recently acquired Nerve.com for an undisclosed sum. With Nerve.com, the company now boasts about 4.5 million unique monthly visitors -- the majority of whom are young, educated, city-dwelling and affluent, according to Schechter.

The monthlong ad campaign will be heavily promoted across HowAboutWe’s media properties with banner advertising.

Though new to native, Schechter thinks he has the model figured out. To make brand partners, readers and editorial staff happy, publishers have to achieve a “true alignment between [editorial and advertising] interests,” Schechter said. “It has to be organic.”

Along with additional editorial to be added throughout the month, HowAboutWe created all the assets for the campaign using in-house design resources