In the ongoing machines vs. humans debate, this is a big win for machines.

The #ad hashtag made some waves during the Olympics, and I’ve seen it done here and there from other athletes on Twitter pages. But if it already seems clunky and awkward coming from big-named athletes, how are the “native” ads going to fare from YouTube stars?

Actually, maybe that’s the point. While Gracie Gold was an Olympic star, “social influencers” are a little more relatable. Do we really want to make them less so?

It just seems a little odd to me that we now have a marketplace where advertisers can buy that space. Good on the “social influencers” for making money off of what they do, and good on advertisers for finding a new way to reach consumers. 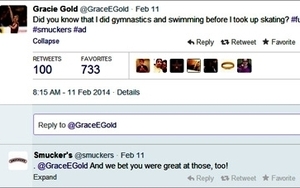 But while those social influencers are currently more relatable, I can’t help but think this will make them less so.

Look at this Gracie Gold tweet from the Olympics, for example. #smuckers? What? It’s a complete non-sequitur.

The "social influencers" act as cogs. So, yes, this is a big win for machines, and one that could leave them with no competition if too many humans become machines.