Retailers Race To Ring In Spring 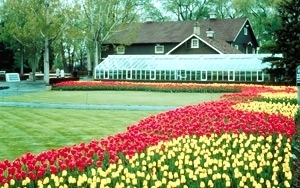 The Bentonville, Ark.-based retailer just announced its largest outdoor living, lawn and garden event, which it says is featuring “Black Friday-like” prices. In previous years, the Home Depot has been first out of the garden gate with vernal “Black Friday” deals, another sign that Walmart is becoming more aggressive in its bid for the patio-furniture crowd.

Consumers spend the most at the large home improvement chains, including Home Depot and Lowe’s, according to the most recent annual survey from the National Gardening Association, or about 27% of the total market. (The trade group estimates the market at $29.5 billion, with average annual household spending of $347 per year.) But mass merchants like Walmart and Target come in second, at 20%, and clearly, Walmart would like a bigger slice.

Its weeklong event will slash prices on some 60 products, from mulch to mowers to grills to live plants, and like big-box DIY retailers, it offers a year-long warranty on trees and perennials.

But 'tis the season for mower wars, and it’s not like the competition is sitting by quietly. The Home Depot last month announced the hiring of an additional 80,000 associates for the seasonal rush, which is it busiest selling season. (And it just announced its second-annual Spring into Service campaign, a season-long effort to plant edible gardens that provide fresh fruits and vegetables for 1,000 homeless U.S. military veterans.)  And rival Lowe’s says it has added 25,000 seasonal hires.

While the national chains dominate, with local garden centers and nurseries now accounting for just 17%, and local hardware stores taking in about 15%, there may be trouble ahead, according to the National Gardening Association. Gen Y, it notes, is emphatically more local in its shopping preferences, with those in the 18 to 34 age range calling the local hardware store their preferred lawn and garden supplier (with 21% of sales), ahead of mass merchants (15%) and home centers (13%.)

Meanwhile, lawn care brands are busy, too, with TruGreen kicking off its first-day-of-spring Backyard Makeover Sweepstakes, with  grand prize of $10,000. (It also offers an intriguing bit of psychographic research: While 69% of those it surveyed report that the sight of a green lawn in springtime makes them feel hopeful, the bigger the family, and especially those with teens, the more hopeful they feel.) And Scotts Miracle-Gro announced the 90 community gardens winning this year’s GRO1000 grants.