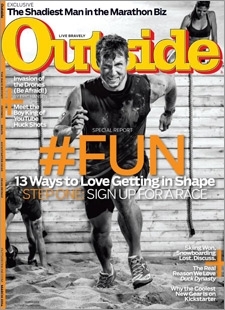 More and more magazines are jumping into the native advertising pool. The list now includes active and adventure lifestyle title Outside, which launched a native ad platform for Outside Online this month.

Outside publisher Scott Parmelee stated: “The Outside team has always worked closely with our brand partners, along with their athletes and expeditions -- and their ideas and narratives -- to discover and cover the most compelling stories in the world outside. Now Outside will offer this capability to our partners to tell their story within the platform of our Web site.”

Currently Outside reaches 20 million unique users per month cross-platform: print, online, television, tablet, social media and events. Many are drawn to the brand’s long-form journalism. Visitors spent an average of 55 minutes per page on Outside Online’s story about the Yarnell Hill fire tragedy.

Harper’s Bazaar is expanding its e-commerce offerings at Shopbazaar.com, with the launch of an exclusive footwear collection designed by Stuart Weitzman with collaboration from Bazaar editors, including fashion market and accessories director Nicole Fritton, style director Joanna Hillman, executive accessories editor Sam Broekema and senior accessories editor Amanda Weiner. The collection features spring shoes, ranging from strappy sandals to stiletto pumps, slides, and metallic flats. The collection is available at Shopbazaar.com, where readers can shop the collection and watch a special video about the design process.

Patrick J. McGovern, the founder and chairman of International Data Group, passed away on March 19, 2014, at Stanford Hospital in Palo Alto, California, age 76. Over a long and eventful career, McGovern and IDG launched magazines including Computerworld, GamePro, Macworld and PC World, among others. In total, he oversaw the launch of over 300 magazines and newspapers, and expanded IDG’s network to include more than 460 Web sites, 200 mobile apps and 700 events worldwide.

His philanthropic contributions included the donation, with his wife Lore Harp McGovern, of $350 million to MIT to create the McGovern Institute for Brain Research. IDG board chairman Walter Boyd stated: “IDG has lost a true visionary, and the IT community has lost one of its most exceptional citizens. Pat’s foremost desire was for IDG to make the world a better place through the medium of information technology.  He created a unique workplace where we have the outstanding leadership team in place to ensure that the company he created will continue to grow and prosper.”

Frum To Senior Editor, The Atlantic

Veteran political commentator and former speechwriter for President George W. Bush, David Frum is joining The Atlantic as a senior editor effective March 31. In his new role, Frum will write for the Web site and the magazine and participate in Atlantic events. Frum stated: “In a media world of quick takes and fast reacts, The Atlantic offers something indispensable: news that stays news. I hope to offer readers content they will continue to think about even after the browser window closes and the latest Facebook status update is buried beneath the Twitter feed.” In addition to authoring eight books, Frum has worked on The Wall Street Journal editorial page, Forbes magazine, and for the Manhattan Institute and the American Enterprise Institute