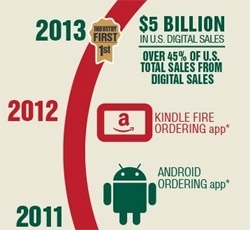 The great thing about pizza is that it is big enough to be topped and sliced a lot of different ways. And for the truly picky, you can even split your choices down the middle and top each half differently.

I know whereof I speak. As a recent convert to Veganism, I really miss my occasional gooey pie. This is a tortuous story to write.

Papa John's gets to have it both ways this week as it launches a national campaign to claim technology leadership in the highly competitive category. A spot featuring sportscaster Jim Nantz and company founder and CEO John Schnatter will tout the company's tech savvy and offer a free pizza credit for online orders of $15 with a promo code.

As of the end of 2013, 45% of Papa John's sales were from online. Jim Ensign, VP of global digital marketing, tells Mobile Marketing Daily the company expects to be the first in its category to get more than half its sales from online this year. “We virtually invented nationwide online ordering,” he says.

And while having a technological edge has emerged as an important branding point in a world where Dominos, Pizza Hut and Papa John's jockey for any advantage, Ensign is also quick to say that taste trumps tech. “It's not about the digital ordering; it's about the pizza. The primary reason for doing these things it to make it easier for customers to get a better pizza.”

After some pilots in the late 1990s, Papa John's went national with online ordering in 2001. In 2007 it started text ordering as well. Ensign says that the company realized early on that tech innovations should not be drizzled into a market. “Over time Papa John's always had a strategy when we introduce channels, whether text ordering or apps or online we launch these nationally. I don't see that in other players. We don't want halfway experiences.”

Generally, the company avoids the bright shiny objects in digital and offering new technologies for their own sake. “We pay attention to what the customer really wants, not a gimmick or something that applies to a couple of hundred people.” The company introduced a digital loyalty program in 2010 that applies across every screen everywhere and Ensign says has been very successful in driving sales.

Even so, he says, one of the hallmarks of the nationwide consistency of experience is localization. Franchises are given considerable flexibility to drive their own offers. The company works with and around sports teams to tie the brand to specific big games and events. The current March Madness is of course one of the busiest times of the year and one where targeting local favorites is especially important.

Digital ordering is not just another channel, Ensign admits. In addition to convenience, the browser, tablet and smartphone interfaces tend to drive higher order value because the customer can see a broader menu of offerings than come to mind when calling it in. Papa John's does not discuss which of the screens is driving more sales, but Ensign says “mobile is growing very fast, as is the tablet.” He sees tablet ordering sharing more with the desktop but also having some of its own patterns in ordering and customer profile. And he says that like the hotel industry where mobile helped boost same-day booking, the pizza industry sees mobile platforms opening up new revenue and ordering opportunities that may not have been there before.

Papa John's early and aggressive push into digital ordering was not a product of advanced research or focus groups, Ensign says. It came from an insight at the top. In 1997 “no one was talking about ordering online pizza,” says Ensign. “It was more of an observation about what customers liked. John really championed that.”