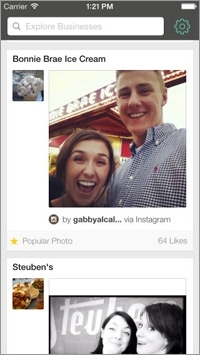 Instagram has long been a favorite of selfie-obsessed teens, but the photo- and video-sharing sharing app is turning out to be big for small businesses as well.

That’s partly because of Instagram’s growing popularity as a social-media tool, with monthly U.S. users up 35% last year to 35 million, according to eMarketer. It now has share roughly even with Twitter on the desktop and more U.S. users on smartphones. Globally, it has surpassed 200 million users, parent Facebook noted this week.

“We’ve been blown away by the volume of photos,” said Perry Evans, CEO of social analytics firm Closely, which makes an app called Perch, which helps small businesses track their presence across Facebook, Twitter, Yelp, Instagram, Foursquare and other social platforms. It also keep tabs on competitors.

Based on data from more than 20,000 businesses in Perch, the average number of posts on Instagram and Facebook is about the same -- 18 posts over the past 30 days. Beyond sheer volume, however, Instagram has shown higher levels of engagement than Facebook.

The average number of likes on Instagram, for instance, is about 41% higher than on Facebook (26 to 17), with the number of comments 10% higher (1.62 versus 1.47). A key difference between Facebook posts and tagged Instagram images for small business is that the former are typically initiated by the business itself, while Instagram images are mostly posted by users.

One could argue that selfies taken via Instagram have indirectly been a boon to small businesses. A key reason for that, according to Evans, is that Instagram’s use of Foursquare’s API and venue data makes it easy to add location data to photos. Instagram is now reportedly testing integration with Facebook Places, leading to speculation that it could end up replacing Foursquare.

For now, when people are posting pictures of themselves at restaurants or of food or venue signage, they’re giving more exposure to local businesses. Any user feedback in social forums, of course, can be a double-edged sword if someone is venting about a bad customer experience.

But Evans suggests that the majority of images posted are positive and serve effectively as endorsements. “And all of this is free to the merchants,” he said. But Evans added that Instagram does not provide notification to business owners when images are tagged to their location.

That’s where Perch comes in, giving business owners a way see the photos posted for their venues, as well as which images are most popular and what’s being said about them in comments. Evans, a co-founder of MapQuest, said merchants don’t realize how many images they are tagged in or the conversations they generate.

Instagram declined to comment on the Closely data, but said it does have a unit dedicated to working with businesses.

The company may face more competition in the photo-sharing realm from Twitter, which this week announced photo-tagging and the ability to upload four pictures per tweet in its iOS and Android apps. “It will make [Twitter] a lot more attractive to SMBs,” said Evans. That's in addition to the change to Facebook’s algorithm, reducing the organic reach of company posts in the news feed.