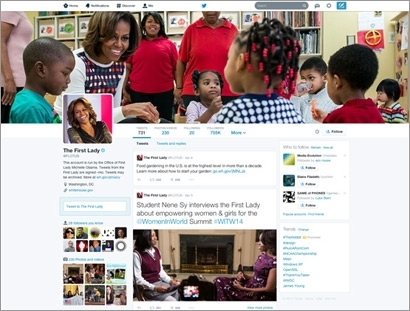 Twitter is about to start looking more like its arch rival -- Facebook. The microblogging service on Tuesday began rolling out a redesign of user profiles that bears a close resemblance to those found on the world’s biggest social network.

The new look features a header photo that spans the width of the page, just like the cover photo on Facebook. It also has a similar in-set user photo above the bio summary.

Content is now displayed in three instead of two columns, with photos and followers on the left, the tweet feed in the middle, and recommendations (of whom to follow) and trends shown in the right column.

Among other key changes, popular tweets will appear slightly larger, with the aim of surfacing the best content. Users will also have the option to pin a tweet to the top of their page, and will have three ways to view others’ timelines: tweets and replies together, tweets with only photos or video, or tweets only.

In a blog post today, Twitter said a small group of users will have access to the new profile set up today, with the update rolling out to everyone else in the next few weeks.

The move comes just days after a Wall Street Journal report, citing unnamed sources, that Twitter plans to introduce up to 15 new ad formats and improvements over the next six months as it tries to ramp up monetization. Twitter is taking a page from Facebook here too, testing a mobile-app install ad unit that has proven lucrative for its fellow social network.

On the desktop, where the new Twitter profiles would have the highest impact, advertising accounted for only 28% of the company’s ad revenue last year, according to eMarketer. That percentage is expected to continue to decrease as mobile accounts for a growing share of Twitter’s overall ad revenue.