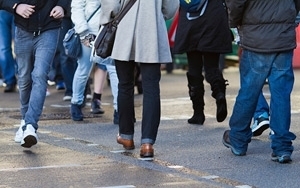 Marketers aren’t usually in the business of handing out genuine freebies, but sock maker Thorlos is giving a pair to everyone in the U.S. And it says the current campaign to get everyone to test drive its pricey performance socks, which retail for $14.99, makes perfect financial sense.

“We do very little advertising,” says Jeff Lawson, director of marketing for the Statesville, N.C.-based brand, who admits it’s not easy to convince people to spend $15 or so on a pair of socks. “It’s very hard for us to convey, in ads, just how comfortable our padded socks are. So for us, we’ve figured out that giving away free samples, one of the oldest marketing techniques there is, has just turned out to provide the best ROI.”

While the company kicked off its massive free sampling initiative a year ago, it’s turning up the heat on the promotion now, to tie in with National Footcare Month. “We know up to 50% of the population suffers from some kind of foot pain or discomfort,” he tells Marketing Daily. “And we’re convinced sampling is the way to win that business.”

Athletic socks are big business, says Matt Powell,  chief retail analyst for SportsOneSource, with about $3.5 billion in annual sales. Nike is the run-away leader, with a 40.8% share. Smartwool, a VF Corp. brand, is a more direct competitor of Thorlos and has a 6.2% share. And Thorlo commands about 1.1% of the total market, Powell tells Marketing Daily.

Thorlos, which began in the 1980s with the first sock made specifically for runners, has built a following for its cushy heel padding and low-friction fibers. (The brand claims to reduce foot pain by 51%, compared to other sock brands, and to significantly limit both the number and size of sports-related blisters.) Since then, it’s expanded to 32 different types of socks, including those engineered for specific sports (such as basketball and golf); professions (like the military) and footwear (Western boots.) It’s got a new line of casual socks, and even a new lighter-weight line, called Experia, for performance athletes without foot pain.

While it’s certainly growing from more demanding young athletes, it’s also courting a bounce among aging Baby Boomers. By age 50, the company says many people have lost half of the fat pads that protect their feet. In fact, Lawson says, the company views its closest competitors as “custom orthotics or high-end insoles more than another sock brand.”

The give-away offer, made via email and social media and which asks people to pay their own shipping and handling, has generated a 40% lift in the first week. And Thorlos is hoping the freebies will draw in loyal customers interested in trying out its casual socks, as well. “We want to expand our share within the sock drawer, too,” he says. “We don’t own everyday wear.”