Demo An App From The Banner 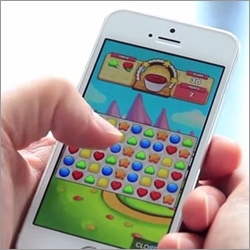 Luring prospective downloaders to an app has been one of the key challenges of the mobile environment now for five or six years. There is the basic hurdle of cutting through the noise with banners and interstitials, incentivized programs and offer walls. That is bad enough. But basically you are trying to convince someone to go through the time, effort and handset space required for a download based on screenshots, maybe a short video clip and promises.

I don’t usually highlight new ad formats here, since there is more than enough fawning mobile press around to do that without my adding to the hyper-machine. But App.io did catch my eye as an especially promising format.

The premise is simple: let the user open a banner ad or interstitial that runs a demo of the advertised app in a browser window. Leveraging HTML5 with fully MRAID complaint approaches, the demo seems to offer a fully accurate and functional experience to the user without their having to download the app. The experience allows for a time-limed approach that gives the user a strong taste for how the app works and its full feature set if desired. After a set amount of time the user is prompted to download the app itself.

App.io says that it can deliver metrics from the first interaction with the ad unit through the interactions with the demo and into the installation. It is expecting to extend the insight into the first day, week and month of user retention after the install as well to provide a lifetime view. The company is still trying to figure out pricing, whether on installs alone or perhaps on lifetime value. The model seems to invite prospective customers who are more likely to stick with an app.

In its early tests of the system, App.io claims to have experienced a conversion rate of 17.9% -- or 3X what is typical on incentivized ads. It has served 2 million demos in trials and is inviting partners to test the system. For now this is iOS. A video illustrating the unit is available. One of the best ways to experience how it works across a number of game and app types is to visit the Showcase of demos.

Head of Business Development David Truong says that brands have been “slow to respond or have found it difficult to understand our tech.” Game publishers are more open to the new approaches and perhaps see the direct benefit most easily since they get to put their game play right in people’s hands. “We're still under NDA with our early partners, but will be releasing the results of our trials in the next few weeks,” Truong tells Mobile Marketing Daily. The MRAID-compliant rich media ad should be able to run on any MRAID-enabled network, he says. “However, the ad network will normally need to 'approve' our ad tag, which impedes us from making this entirely public right now.”

Of course, the App.io approach still has the problem of relying on an interruptive banner or interstitial to pull people into the demo to begin with. Presumably, however, the ad creative itself can be more compelling if the viewer expects an immediate encounter with the advertised app that requires less muss and fuss.

It is remarkable to me that someone hasn’t done this earlier. And I have vague recollections of some companies trying HTML5 Web app versions of their downloadable apps. It seems a natural fix for a problem the app environment itself created. The app experience offers rich interactive environments that require a leap of faith and investment to try.

As I have said before here, there is something radically regressive about the app economy. The siloed nature of apps and the basic mechanics of of discovery and installation actually recall the very earliest days of PC software. I was there in the days when PC enthusiasts flocked to circa 1980s “computer shows.” This is where we discovered new software, on big black 5 ¼-inch floppy disks from rows and rows of software in the vendor areas. We bought them for $1 a disk, often demos, that needed to be loaded onto our machines back home, tried and unlocked for full paid versions. The timeline for this process may be shorter on a connected handset, but the steps involved still harken back to a kludgy system that is decades old.