Will Fox Be Wild About 'Harry'? 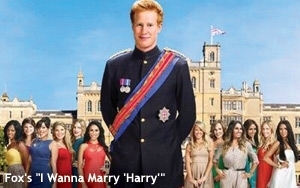 We’re just about five weeks away from the premiere of a new summer reality series with one of the most unreal premises ever: In Fox’s “I Wanna Marry ‘Harry,’” twelve American women will compete for the love and affection of a man they believe to be the one and only Prince Harry of Wales.

I have to hand it to Fox: With the return of its signature drama “24” in a new twelve-episode format and the debut of “Harry,” both in May, the network already has a lock on being the most buzzed about broadcaster of the summer season. The excitement surrounding “24: Live Another Day” is expected and self-explanatory. “Harry” is another matter entirely.

The promos for “Harry” refer to its concept as a “royal hoax.” They also remind us that it’s coming from the network that brought us “Joe Millionaire,” the highest-profile and most successful hoax in the history of modern reality programming. In that 2003 series, the first season of which remains one of the highest rated reality shows in recent memory, 20 women competed for the love of a man they were led to believe was worth approximately $50 million dollars. In reality Joe (real name Evan Marriott) was actually a construction worker and former underwear model. Americans were obsessed with this show, at least the first time around, making it a ratings behemoth. Fox tried to do it again, but its second season flat-lined on arrival. The novelty was gone. There could never be another Joe.

Given the fact that Prince William and his younger brother are two of the best known and most readily recognized individuals on the planet, it would seem there could never be another Harry, either. But that doesn’t appear to have been a problem for the producers of “Harry” or its beautiful participants. The big question here is this: How could these women possibly have been made to believe that the real Harry would be involved in such a nitwit program or that he would even have time for such a thing? Haven’t they been near a newspaper, television, phone, computer or tablet in recent years? (Maybe they only know him from his naked romp last year in a Las Vegas hotel suite.) That’s the polite way of asking the question on everyone’s minds: How stupid are these women?

As we know, some producers of reality television – especially of the kind popularized on Fox during the early years of this millennium before “American Idol,” “House” and “24” came along and classed up the joint – can be particularly sneaky, manipulative and soulless. They’ll set up and screw over anyone for money. The results often have been pungent. In addition to “Joe Millionaire,” does anyone remember “Playing it Straight,” in which a woman desperately tried to determine if a number of greedy men were gay or straight, or “Who Wants to Marry a Multi-Millionaire,” a two-hour special that proved to be a publicity disaster for everyone involved, especially the network? In hindsight, the list of such swill-filled shows seems endless.

On the one hand, it’s a shame to see Fox taking baby steps back down that regretful road. On the other, the network wants and needs to make noise, given the many ratings problems it has suffered this season, and there is no better way to attract immediate attention than with a crazy new reality show like “Harry.”

Of course, “Harry” could prove to be so poorly made, and so badly paced, and so utterly boring once the novelty wears off – as often happens with such shows – that it could add to Fox’s woes. But if it holds to those production standards that elevate and legitimize trash like “The Bachelor,” then Fox could have a one-season wonder on its hands. It certainly has the feel of a fun summer series – even if that fun is going to be had at the expense of twelve women who will likely become known as a dozen of the dimmest dimwits in the land. Still, as long as they are pretty and media-centric enough, I expect at least one or two of them will end up in a series on Bravo or E! before the excitement settles down. Also, they’ll be all over In Touch and Us. Meanwhile, Matthew Hicks, an English fellow who bears an uncanny resemblance to Prince Harry, is going to be one of the most talked about media personalities of the summer.