The Most Interesting Man In The World Meets Foursquare 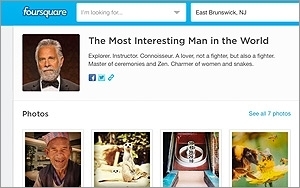 He may not always check in, but when he does, it’s usually on Foursquare. Yes, the Most Interesting Man in the World has made the leapto the social location service, leaving tips from exotic locales ranging from Mount Everest to... the Austin Convention Center.

The famed pitchman for Dos Equis beer seems very much at home on Foursquare, where he’s become what's reportedly the first “brand personality” on the site. The Most Interesting Man in the World, portrayed by actor Jonathan Goldsmith, debuted in Dos Equis TV spots in the U.S. in 2006.

That’s in large part because of the clever concept, inventive, grainy-footage flashbacks, Goldsmith’s characterization -- said to be inspired by his friend and fellow actor Fernando Llamas -- and, I would add, the voiceover done by Will Lyman, longtime narrator of PBS’ "Frontline" series. The gravity of Lyman’s intonations matched with the ridiculous nature of the ads has always made a hilarious contrast.

Needless to say, all of those elements don’t carry over to the character’s presence on Foursquare. But the pairing of the Most Interesting Man in the World and the location-based social network makes sense as a way to extend the campaign to the social and mobile spheres.

The framework of Foursquare provides a natural platform for the global adventurer to dispense pithy insights from a range of venues and locations that highlight use of the service to learn about new places. Consider: From Brooklyn Bridge Park, the Most Interesting Man left this tip: “I have never worn skinny jeans, but if I did I would wear them here.”

And at Paramount Studios: “They want to turn one of my morning jogs into a feature film. We’re still working out the details.”

The character has left more than 150 tips so far, “reminding people to lead an interesting life, particularly in the weeks leading up to 'Dos de Mayo,’” said a Foursquare spokesperson, referring to the Dos Equis’ campaign tied to Cinco de Mayo celebrations kicking off on May 2.

Behind the Foursquare effort is MediaVest and Havas Worldwide, which originally developed the Most Interesting Man campaign for Dos Equis. The agency earlier this year also worked with Foursquare on Heineken’s Foursquare Fan Footprint campaign in connection with the UEFA Champions League tournament.

The Most Interesting Man will have an ongoing presence on Foursquare, according to a Havas spokesperson. One smart step carried over from the TV spots is that the character doesn’t actively push the Dos Equis brand on Foursquare. By now, the Hemingway-esque persona is already closely associated with the Mexican beer.

Still, the agencies involved should be mindful of not wearing out the character on Foursquare by “oversharing” -- he’s probably already posted more tips than most real people ever do, except the most avid users of the service. Don’t let the Most Interesting Man lose his phony mystique by turning up everywhere, including the local Pizza Hut. It’s just not in character.