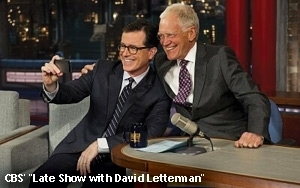 “He’s just dropping by to sign the lease. He’ll be taking over the show next year, pending the physical.” Those were David Letterman’s remarks during his monologue last night about his special guest on the show, Stephen Colbert, currently the host of Comedy Central’s “The Colbert Report” and the recently announced future star of Letterman’s own “Late Show” on CBS.

Indeed, when Colbert walked out on stage a few minutes later and began chatting with Letterman, the segment took on the feeling of an exciting glimpse into the future. It’s hard to imagine that in a little over a year Colbert will be the star of “Late Show” (or that Letterman will vanish from late night for the first time in 30 years). Whether or not it will still be produced in The Ed Sullivan Theater has not been confirmed. But since Colbert seems every bit an East Coast guy, I can’t imagine the show leaving New York City, so there doesn’t appear to be any reason why CBS wouldn’t keep it right where it is. Presumably changes will be made to the set itself, lest Colbert look like a guest host in Letterman’s spot.

Colbert certainly seemed at home on the “Late Show” stage, in the way that middle-aged men always look at home in the lookalike environs of broadcast’s homogeneous late-night arena. If it was CBS’ intent to freshen up “Late Night” without making too many changes or taking too many chances, then Colbert was clearly the right choice.

That’s not a dig at the very likeable Colbert; it’s simply a statement of fact. As the man himself said to Letterman last night, “I’m going to do whatever you have done. It seems to have gone pretty well.”

As if to prove the point, Colbert read a Top Ten list he had submitted to “Late Show” when seeking a job on its writing staff 17 years ago. It featured the Top Ten Cocktails for Santa and made clear that Colbert wasn’t quite ready for the big time back then.

Colbert proved very entertaining while telling stories about his own life the way broadcast’s new late night hosts often do. (Seth Meyers is currently the most engaging of them all when sharing the details of his personal life with his audience.) Listening to him talk about being accepted for an internship in 1986 on Letterman’s old show at NBC (now hosted by Meyers) and then turning it down (because it didn’t pay) and losing a girlfriend in the process (who wanted the internship), and recalling the time he broke his wrist at the start of a two-week vacation and chose not to seek medical attention until the vacation was over (choosing instead to build a boat during his time off), I was reminded of another very famous talk show host who made a name for himself outside of late night and is never funnier than when talking about his own experiences -- Regis Philbin.

Maybe I’ve been watching too much television lately, but when Colbert took off his glasses I thought he even looked like a younger Reege.

Anyway, I’m hoping that Colbert might try to distance himself from all the other broadcast late-night guys and place a greater emphasis on adult engagement rather than perpetually playing to the kids (the way Kelly Ripa and Michael Strahan and Steve Harvey and others do on their daytime talk shows). He surely seems up to the challenge of being himself (rather than his Comedy Central persona) and keeping it real, as he demonstrated last night.

It’s not that I don’t enjoy Jimmy Fallon, Jimmy Kimmel and Seth Meyers, but one of the things I like best about Letterman is that like Johnny Carson and Jay Leno before him, he is comfortable talking to grownups like they are grownups, whether he is looking for humor or something a little more substantial in their responses. I realize that asking for an emphasis on talk goes against the current late-night focus on crafting nightly shows that work well when chopped up and repurposed as videos on YouTube, but if every show does that then none of them are really going to stand out from the pack, are they?

broadcast networks, tv
3 comments about "Stephen Colbert Gives Us A Glimpse Into The Future Of CBS' 'Late Show' ".
Check to receive email when comments are posted.
Read more comments >
Next story loading