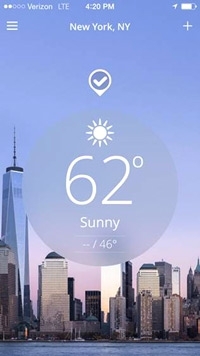 One of the most popular and longest-lived apps in the Apple App Store gets a major overhaul today as The Weather Channel updates its iPhone app. The radically streamlined design opens with a clean one-tap look at the current local temperature and major stats. And unlike the old paginated layout, the new app is now a continuous scroll through hourly forecasts, major stories, airport reports, pollen counts and a new social feed that collects reports from users.

The Weather Channel is promising greater efficiency in the design. The radar screen, for instance, is designed to load faster. In each section of the vertical scroll there is a lateral carousel of addition content that lets the user stop and drill deeper into any category of news and video.

The new social Weather feature invites the local user to tap an icon to add their report of the current conditions, and they can even upload an image. The user-generated content is collected onto a map interface. Also included in the feed are airport delays and pollen reports.

Also part of the new layout is a prominent native ad format. Inaugural sponsor Kellogg’s was visible on the first day of the new app's appearance. A large square ad unit is inserted into the feed.

It may not be coincidental that the new Weather Channel bears more than a passing resemblance to the Yahoo Weather app. Ranked number two in popularity among free weather apps in the Apple App Store, Yahoo’s rival offering arrived last year to much acclaim for a similar simplicity of design, reliance on a background visual and a scrolling interface.

The Weather Channel is leveraging its celebrity newscasters and TV muscle to promote the upgrade. A comic promotional video has weatherman Jim Cantore explaining that the new app is “the next best thing to cloning me.” As he walks through the Weather Channel newsroom, his fellow staffers are sporting Cantore’s signature blue rain jacket and bald head.