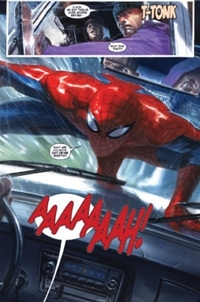 Days after announcing its company’s acquisition by Amazon, one of the highest-grossing non-gaming apps of them all announced it was ending in-app purchasing for its iOS version. ComiXology, which ranked as a top moneymaker in the Apple App Store for the last several years, abruptly replaced its existing combined storefront/reader app on iOS with a new version that is only capable of reading comics titles that Apple users must purchase at the ComiXology.com Web site.

The Android version continues to offer in-app title browsing and purchasing. Apple users now can only search for new titles and add them to a wish list that is synchronized with the Web ordering system. This follows the model that Amazon also uses in its Kindle apps for iOS, where readers can make ebook purchases at Amazon's site and then download the editions into the app from the Amazon's cloud service.

Apple famously demands a standard 30% share of revenue made from in-app purchases. This high toll on publishers has been a sore point for a number of developers, including rival book publishers like Amazon and Barnes & Noble. But ComiXology has had a three-year success story as the top-grossing non-game app in the Apple App Store. Coming only days after the Amazon acquisition, it is hard not to see this as the bookseller depriving Apple of app revenue and deliberately undermining the iOS app experience in favor of Android and Kindle versions, which continue in-app purchasing.

After outlining the new iOS limitations -- without much rationale -- at the company blog, ComiXology said it was giving iOS customers $5 gift credit “to thank our loyal customers and ease this transition.”

We did ask ComiXology how the change to the iOS app in particular could be construed benefitting consumers. The company says that as it transitioned to Amazon's ownership it was adopting the Kindle model and trying to achieve "the best balance between prices, selection and customer experiences." They do argue that there are advantages to selling content outside of Apple's store. To wit: "There are many advantages to shopping at comiXology.com. Because of the content restrictions our mobile partners have, shopping on the web provides even greater selection of comic books and graphic novels. iOS customers will now be able to save money with comiXology’s exclusive web-only Bundles,  take advantage of Subscription features and enjoy eGift Cards. We also made our website more tablet/mobile friendly on all devices to make the purchasing process that much easier. And in Safari on iOS, customers can easily save a shortcut to our webstore with the "Add to Home Screen" feature."

They added that a new version of the ComiXology.com site was more smartphone- and tablet-friendly to make ordering on the same device as the reader consumers the content easier.

Well, maybe. Customer response in the Apple App Store was swift and generally unforgiving. While the familiar old ComiXology app that remains on Android enjoys a 4-star average rating, the new version on iOS stands at 1.5 stars, with commentary running overwhelmingly negative.

As it should. As I have argued here on more than one occasion, the ComiXology app was far and away the most effective storefront on devices for merchandising digitized print content. This move effectively breaks, by its own hand, one of the best-run app merchandising operations in the app store. Consumes are being inconvenienced for the sake of a business rivalry. That is bad policy and bad form.