Note: The author of the Forrester report, Susan Bidel, was previously senior director of sales development at PubMatic. A Forrester representative told RTM Daily that Bidel "does not have equity in [PubMatic]."

Research firm Forrester analyzed and scored what they deemed to be the “six most significant providers" in the supply-side platform (SSP) category: AOL Platforms, AppNexus, DoubleClick Ad Exchange, OpenX, PubMatic and Rubicon Project. The company on Tuesday released its findings in a Wave report.

AppNexus, OpenX, and AOL Platforms are highlighted as companies that provide “competitive options” and are considered “Strong Performers,” one step below “Leaders.”

All six platforms were evaluated in February 2014.

Among the “Leaders,” PubMatic leads the way. Forrester calls the company “the last of the purebred SSPs,” meaning it’s the last SSP “fully focused on the needs of publishers.” Forrester says PubMatic is “ahead of the curve” with regard to mobile and video integrations, which are both hot topics on the buy-and-sell sides.

Rubicon Project is knocked for its lack of a video solution, but Forrester considers it a "Leader" because of its work supporting private exchanges and premium programmatic selling. Rubicon was also a “Leader” in the 2012 report.

AppNexus’ strength -- a strong focus on technology -- is also its weakness, per the Forrester report. On the plus side, the company has proprietary tech, meaning it's flexible when it comes to partnerships. On the down side, the tech-focused approach means “AppNexus is not geared toward working with publishers that do not have large and mature technical teams supporting their programmatic selling initiatives."

Forrester says OpenX is growing its market share and has strong private exchange and programmatic premium offerings, but believes its user interface could be upgraded.

AOL Platforms is the latest SSP to enter the conversation, but Forrester notes that the company is “rapidly making up time with big investments in technology and talent.”

Forrester carried out its research through vendor surveys, product demos and customer reference calls. To qualify for consideration, vendors must have a minimum customer retention rate of 80% and must have enterprise and mid-size clients represent at least 25% of their client base. 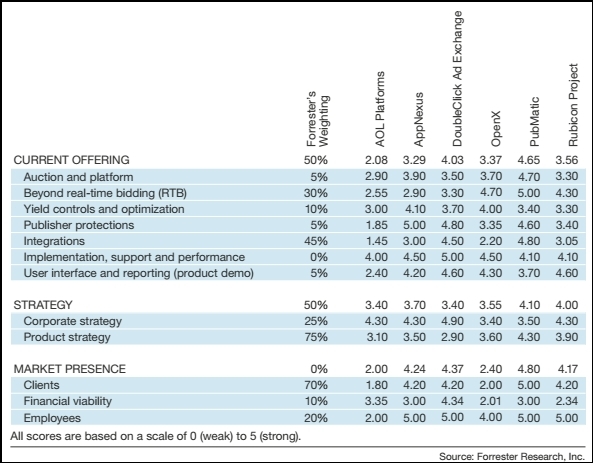