All Eyes On China As Smartphone Battleground 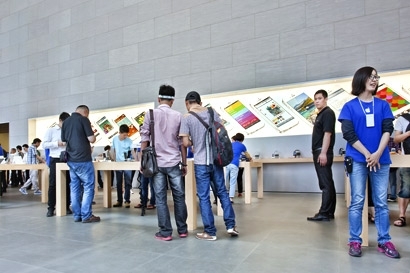 Apple surprised Wall Street last week with a blowout quarter, mainly as a result of higher-than-expected iPhone sales in the first three months of 2014. The record 43.7 million Apple handsets sold reflects the boost the tech giant got through the partnership forged with China Mobile, one of the world’s largest mobile network operators.

The results underscore the growing importance of China for Apple and other manufacturers as smartphone growth slows in the U.S. and other mature markets. A record 40% of smartphones shipped in the first quarter were bound to Chinese consumers, according to IDC's new quarterly report on the smartphone market.

In a quarter where global shipments saw a seasonal dip from the fourth quarter of 2013, China bucked the trend. That was partly because of the iPhone coming to China Mobile, which led to overall shipments increased by a third from the prior quarter.

Flurry earlier this year projected China would overtake the U.S. as the world’s biggest smartphone market in February, with 246 million Android and iOS devices activated. That's where the battle for smartphone share will increasingly be fought as high-end suppliers like Apple and Samsung contend not only with each other but China-based competitors like Lenovo and Huawei.

Growing demand in China and other emerging markets helped push overall shipments up 28.6% in the quarter to 281.5 million smartphones, 5% higher than IDC’s forecast of 267.2 million units. Still, the research firm expects growth in 2014 to slow to 19.3% from 39.2% last year because of because of greater saturation in the developed world. But if the first quarter is any indication, it may have to end up adjusting its outlook.