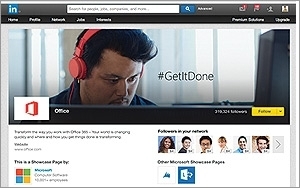 Almost two-thirds of LinkedIn’s 300 million members are now outside the U.S. With the professional networking site’s recent entrance into China, that proportion is likely to grow.

In light of its expanding international presence, LinkedIn is rolling out a pair of new targeting options: language preference targeting and personalized page feed. The offerings for company pages and showcase pages -- in which companies can spotlight particular brands or business units -- are meant to help global brands reach specific audiences around the world.

LinkedIn is already available in 21 languages. But with language preference, brands can now target company updates by the users’ selected language. For example, if a U.S.-based company wants to reach Portuguese-speaking professionals in Brazil, it can share updates in Portuguese with followers who have selected it as their preferred language on LinkedIn.

Separately, the personalized page feed is intended to show people only relevant material when they visit a company page. If a company posts separate update for users in France and Brazil, each group would only see the update tailored to them.

That premise would also hold true for other filters, such as company size, industry, function, seniority and geography. People going to a company page would continue to see updates targeted to all followers, as well.

“With these features, global companies can have a more relevant exchange with their unique audiences from around the world. Combined, they ensure that our members see the messages intended for them, written in the language they want to consume on LinkedIn,” stated Aviad Pinkovezky, LinkedIn’s head of product development, in a blog post.

LinkedIn noted there are already “several million” company pages and showcase pages, with the vast majority created internationally. They are part of LinkedIn’s broader strategy of expanding from job site to content platform, giving users more reason to stick around and come back more often.

By improving language targeting, LinkedIn could help boost engagement -- which in turn could allow it to show more ads. While representing only one-third of its user base, the U.S. still accounts for almost 60% of its ad revenue. During its first–quarter conference call last week, LinkedIn said international revenue, including its ad business, increased to 40% of total sales, up from 38% in the year-earlier period.

All eyes are now on LinkedIn’s expansion in China, where it has just 4 million English-language members today. With the rollout of a localized site in February, it aims to attract more of the 140 million students and professionals in China as new members