Gamification: Who You Playing, Player? 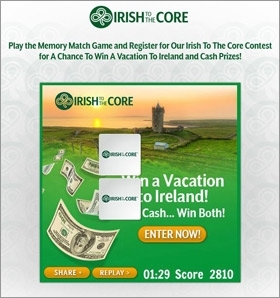 I have to admit I find most attempts at so-called “gamification” more annoying and cloying than compelling. Whenever an ad unit tries to engage me in something designed to mimic an actual, enjoyable game, I feel less as if I am playing and closer to being played. We both know I am not here to play and that ultimately I am being sold something in a way that is not supposed to feel like the pitch that it is. Yeah, yeah, yeah. I know all about this supposed “exchange of value” and being “advertaining.” But come on. Really. Who is doing the gaming here?

But I am jaded and curmudgeonly and suspicious of most fun simply on principle, my wife assures me.

But the evidence suggests even to this joyless neo-Calvinist that one of the secrets to engagement on touch platforms often rests in small, even cloying, bits of pleasure.

And given the generally tedious state of mobile creative, you have to admit that even tiny pleasures beat the banner by a mile. “If you know you have to be advertised to, you might as well give the consumer something they would be willing to engage with,” argues Scott Reese, CEO, co-founder, blurbIQ. His platform provides tools that layer onto ad units a variety of game-like interactions. In some cases it can be trivial questions on top of a standard Rosetta Stone video spot. For Macy’s it might be a scratch-off interface that reveals more detailed offers and microsite beneath. For a liquor brand it is a more ambitious tile matching game that allows a contest entry upon completing.

Not one will accuse these “gaming” engagements of having "World of Warcraft" immersiveness or even "Clash of Clans" polish. But they don’t have to. In fact they seem to activate a reflex. “If it takes a challenge, that is what taps into human nature,” Reese says. “It is about being challenged, or let’s see if my friend can beat my score.”

He says this basic response adds up to real engagement -- average time spent in the units of 239 seconds and double-digit CTRs. The platform offers a set of self-serve tools for advertisers to enhance and augment their own ads. They generally attract CPMs of $1.50 to $2.

And Reese admits that the game may not be absorbing them directly into the brand, but with those levels of hang time, something is bound to register. “Subconsciously they are spending time with something new and remembering that bottle of alcohol,” he says.

And in fact, he says that while the ads are designed to work across screens, “we see much more engaging experiences with tablets and mobile than sitting on a laptop and clicking.” And the sharing is also accelerated on devices, especially via Facebook.

Gamification is attracting larger brands with some big mobile budgets because they become a way of super-engaging a slice of the users, says Saurabh Bhatia, co-founder, chief business officer, Vdopia Inc. -- which mainly does mobile video but also adds game elements to rich media ad units. “They launch standard stuff and then they gamify some part of the budgets,“ he says. “This kind of advertising is used in certain kinds of campaigns,” he says. “It is used by brands who are embracing mobile and who favor all different kinds of campaigns. They may be doing a key launch with a larger budget with a lot of video, and interstitials and targeting. But on top of that we want to create a unique spot which will lead to our brand standing out -- an ad that feels like content.”

Well -- or feels like a tiny candy on a conference demo table, or that half knob at a science museum begging you to “push me.” Cheesy as most gamification formats may seem, they appeal to a basic compulsion to solve even the tiniest conundrum. In fact, the tinier the better. Maybe the secret to this ad genre is not that the creative challenges us so much as gives us the fleeting impression that we have been challenged and won. It is the game we all can win, where everyone gets a medal.