The vast majority of programmatic advertising may take place in the U.S., but it’s always worthwhile to take a step back and view the marketplace from a global perspective.

The UK has been considered the No. 2 place-to-be for programmatic ad buying, but Southeast Asia and Australia have both emerged as regions of interest. U.S.-based companies have noticed this, and several have opened up offices and built up teams to support growth in those areas.

Some may argue that those two issues could hold programmatic video adoption back, saying that publishers could have a time parting with more valuable inventory and advertisers wouldn't want to spend big without being 100% sure what they were getting, but don’t tell that to marketers in Southeast Asia or Australia. 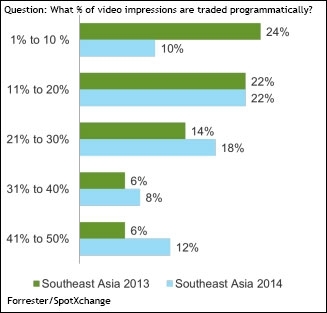 According to a recent study conducted by Forrester on behalf of SpotXchange, 12% of Southeast Asian marketers say 41-50% of video ads have been traded via programmatic so far in 2014, compared to 6% in 2013.

In other words, twice as many marketers are buying a hefty portion (41-50%) of their video ads via programmatic in 2014 compared to 2013.

On the flip side, 10% of marketers said 1-10% of all video impressions were traded programmatically during the first few months of 2014, down significantly from the 24% of marketers who said so in 2013.

The trend is apparent in Australia, though it may not be as clear. No Australian marketers said they bought 41-50% of video ads via programmatic in 2013, but 2% are said to be buying that much so far in 2014.

15% of Australian respondents said they are buying 31-40% of their video ads via programmatic so far in 2014, up significantly from the 6% that said they bought that much in 2013.

More marketers in Australia are buying 1-10% of their video ads via programmatic so far in 2014 (13%) than were in 2013 (9%), and while that appears to go against the pattern, it’s possible that it simply means more marketers are entering the programmatic arena but starting small.