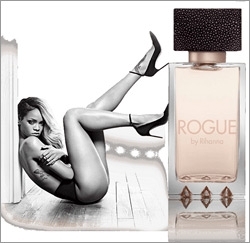 The U.K.’s Advertising Standards Authority says that fragrance ads for Rogue by Rihanna are too sexy for kids, and has placed restrictions on where the posters may be displayed.

The ads the show the ever-rebellious singer seated with her head and shoulders against a wall, and her legs raised against a large bottle of perfume. Aside from some very high heels, she’s naked. And while the image makes sense for a fragrance with a “Push boundaries. Be bold. Go Rogue” tagline, someone found it offensive enough to complain to the watchdog group.

In a statement, the authority says it ruled on a single complaint that the ad was both “overly sexual and demeaning to women,” and that it featured a “sexualised and provocative image, which was inappropriate for children to see.”

Parlux Ltd, which did not respond to Marketing Daily’s request for comment, told the authority it did not think the ad breaches the code, and says it has not received any other complaints, either in the U.K. or elsewhere. “They said Rihanna was known for her provocative songs and persona, which the ad sought to capture,” the ASA says. The company also argued that the ads reflect “the norms of the fragrance industry.”

Its ruling says the ad is not demeaning, since Rihanna’s expression is defiant rather than vulnerable, and that because it projects confidence, it’s not demeaning.

But while it didn’t consider the ad sexual, it did call it provocative. “Because of this, and the fact that Rihanna appears to be naked except for high heels, we conclude that the ad is sexually suggestive and should have been given a placement restriction to reduce the possibility of it being seen by children.”

Meanwhile, the singer took the U.S. fashion crowd by storm when she arrived at a CFDA event this week. To accept her honors as a Fashion Icon, she arrived in a see-through dress its designer described as being made of “fishnet, 200,000 crystals and a couple of fingers crossed.” The get-up took Twitter by storm. (It probably didn’t hurt that she twerked for the cameras.)

Even Peter Griffin from  “The Family Guy” jumped in on the fun, with TBS tweeting a picture of the cartoon character in the same exact dress, right down to the exposed nipples. "The tweet read: That awkward moment when you and your bestie are wearing the same thing,” and had the hashtag #OneOfUsNeedsToChange."

Rihanna then used a photo of the cartoon character next to her, captioned: “He gets it!”

Parlux introduced Rogue, the fourth scent from Rihanna, last fall and markets it with the promise that it “captures the mischievous nature that lies within every woman.”