Connected Baubles: The Internet Of Oh-What-The-Hell-Why-Not? 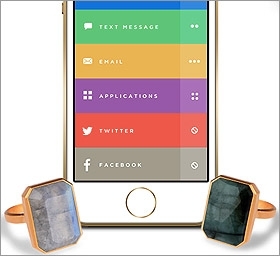 Okay -- we have been through the first wave of experimental wearables like Google Glass. We saw the fitness bands and apps get serious traction this year. Time for the silliness to begin. Wearables and sensor-based devices are about to see their 1999 -- the go-go years of dot-comming any and every idea and business model. With the emergence of wearbles and the concept of a Big-Data-driving connectivity and  Internet of Things, you have four buzzwords easily swapped, mixed and matched for any VC-aimed business proposal.

It could give connectivity a bad name.

A New York manufacturer of connected jewelry, Ringly, celebrated this week its pre-selling $60,000 in merchandise in the first 8 hours the connected ring was on sale. The Ring communicated with your smartphone to alert you only to the most important messages with one of four possible vibration patterns. Fully programmable via the app, you can designate which call sources, app alerts, texts, etc. merit a finger buzz.

Let's leave aside the fact that the block-like ring is about as visually appealing as Samsung’s Gear or the prototype Google smartwatches that have been making the rounds. I am not sure why we want devices mimicking neurologic damage in our extremities.

Who am I to judge fashion sense?

A somewhat more intriguing -- and certainly more laudable -- piece of connected jewelry, is the Safelet connected bracelet from an Amsterdam-based company that is crowd funding the project on indiegogo. The bracelet, which is reminiscent of Wonder Woman’s bullet-deflecting pair, connects to an app and can signal police and your network of friends and family your whereabouts and whether you are in danger.

I have to admit some queasiness about how the product is being promoted as a web of safety for the user. Unless the thing really does have Wonder Woman levels of weaponry, simply notifying your network of peril doesn’t prevent danger so much as report it. I think the pitch overreaches. And I am not sure we need a Wonder Woman bauble for this anyway. It seems like the kind of emergency action that could become an easy shortcut programmed onto your smartphone anyway. And I am a dad of a college co-ed. I prefer keeping her pepper spray refreshed and teaching her the art of holding her keys in weapon mode.

But connectivity is the buzzword, so let's start slapping sensors on anything we can find and wrap a model or rationale around it. We have already seen connected piggy banks and bedside clocks that report your online messages. It all looks like forgettable Brookstone gifts right now. The sheer volume of these connected whatsits are likely to obscure the promising from the negligible.

Which is to say again, it is 1999 -- but totally untethered from both the desktop and perhaps from common sense.