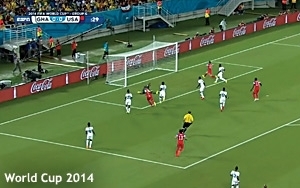 As the world’s most popular sport, soccer is a natural fit with mobile as a truly global communications technology. Wherever a soccer ball is kicked from a South African township to a Cairo side street to the Rio favelas, mobile devices are also likely to be found.

The World Cup only underscores that reality as fans globally tune in via a range of devices to keep up with the action as the tournament unfolds in Brazil. According to new data mobile research firm Ovum, the 2014 World Cup is proving to be the most accessible in its history, with broadcast and streaming available on up to 5.9 billion screens.

PCs, tablets and smartphones are increasingly providing alternatives to conventional TV viewing, accounting for 57% of all screens. Given that people typically want to watch the matches on the largest screen available, that means traditional broadcasting—through terrestrial, cable, satellite or IPTV — will command the biggest audiences, and the most ad dollars .

At the same time, it puts pressure on broadcasters and operators to deliver on the promise of TV Everywhere for cross-platform viewing. “While viewing live events online is improving, there is some way to go before it can compare with the reliability traditional TV distribution offers for the largest audience,” noted Ted Hall, a senior analyst at Ovum.

In the U.S., viewership of the World Cup, which began on June 12, is already ahead of last year’s pace. Univision, which has the Spanish-language broadcast rights to the event in the U.S., has let people stream the first two rounds of World Cup games without having to “authenticate” as pay TV subscribers. The U.S. vs. Ghana match on Monday drew 1.7 million streams—the fourth most-watched live stream ever for Univision Digital.

The match also set a record for ESPN’s mobile streaming app, Watch ESPN, drawing an audience of 1.4 million. The cable sports network, which is live-streaming all 64 World Cup matches, also launched a revamped ESPNFC Web site and app in connection with the event.

Professional soccer is gaining a wider audience in the U.S, but has been the No. 1 sport in much of the rest of the world. So it’s not too surprising that smartphone-toting World Cup followers in the U.K. were the most willing to pay for video content of the tournament than any other country polled (80%) in a May study by On Device Research for the IAB. Mexico was a close second, at 78%.

For all the growing activity on smartphones and tablets, not to mention companion tools like Twitter and Facebook, people still want to gather for big events like the World Cup. The scores of videos posted to YouTube of fans around the country exploding in rapture after the U.S. scored a late goal to beat Ghana 2-1 attest to that. But many of those videos were also likely shot with a smartphone