Is The Amazon Fire Even Warm? 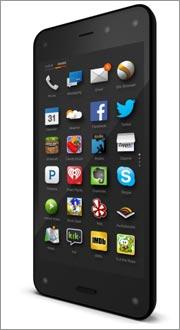 If even 10% or 15% of smartphone users end up with an Amazon Fire in their pockets in a few years, then this column can be filed in my “dead wrong” drawer. But after watching some of Bezos’ presentation yesterday and poring over the phone details themselves, I confess that I just don’t get it.

The Amazon Fire has a load of incrementally sexy features like head-tracking 3D perspectives, image stabilization in the hi-res camera and a media listening/capture tech. I admit that I have myself admired Amazon’s focus on enhancing the media experience in its devices like the Kindle Fire. Features like X-Ray enhancements to book reading and film viewing are not only handy innovations -- they remain core to the Amazon brand media.

But a lot of the cool features on the Amazon Fire and its price point are aimed at a tech-savvy slice of users that are probably the most invested in iOS or Android already. It seems to me the phone aims at the piece of the market where shifting share would be hardest. Microsoft was relatively late to the party of smartphones as well, but at least it positioned the Windows Phone as a phone for latecomers to smartphones or for people who didn’t like spending a lot of time with their phone. The strategy didn’t work very well in the U.S., but it seems to have had greater traction abroad.

Bezos was trying to channel Steve Jobs in style and substance yesterday. He mentioned “obsess” more than a few times in gushing over the materials used in the phone. He stepped back and told us what we were supposed to find stunning and beautiful about what he was showing us. He even told us about screen size tests that proved a 4.7-inch screen was the perfect compromise of size that retained one-handed use. Very Jobs-ian. But he left us with no compelling reason to forsake three or more years of investment in an ecosystem to gain some innovations at the edges. At half the price, then the Fire Phone may have a claim on our attention, and Amazon would be in a better position to leverage its mass retail reach.

We have seen this sort of brand hubris before. Of course, Facebook’s attempt at issuing its own phone was a non-starter. But long before that, the entire MVNO craze of the 2005-2007 era showed that people really didn’t identify any old brand with phone service. Remember the ESPN and Disney phones? The long rumored Walmart MVNO? At one point when I was reporting on this phenomenon I saw a chart that gathered 200 such branded phone projects in the works.

As a brand Amazon is identified with selling us stuff. It is an identity that is borne out on its Kindle Fire devices and makes a lot of the interface feel more like a storefront than a dedicated media experience. You are never far from a recommendation to buy something else.

It's hard to believe that the Fire Phone will be much different. Salesmen and merchandisers just can’t help themselves.

amazon, mobile, smartphone
1 comment about "Is The Amazon Fire Even Warm?".
Check to receive email when comments are posted.
Next story loading