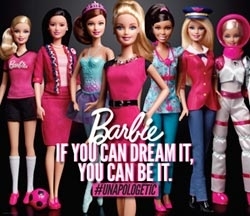 Yes, we know this sounds stupid. But strong, smart women are hot right now, and having something of a Madison Avenue moment.

Pantene -- a brand that deserves plenty of credit for reigniting conversations about gender bias -- recently released Not Sorry, a video that challenges women to apologize less and assert themselves more. It has quickly racked up 2.5 million views on YouTube. The #BanBossy movement, a partnership between the Girl Scouts of America and Leanin.org, has generated so much buzz that even Mattel is responding, last week unwrapping the tablet-toting Entrepreneur Barbie. And brands ranging from Verizon, GE and Bridgestone Tires are airing new spots that stretch well beyond the mom-in-the-kitchen creative so many brands still rely on.

Marketing experts say that while Gen X and Baby Boomer women have long expected ads to play to their strengths, the dialog about gender bias is especially relevant to Millennial women, who are busy both establishing themselves in their careers and buying Goldiblocks for their little girls.

“While the #BanBossy effort got a lot of negative press because people didn’t like the idea of banning the word, it was a highly shared conversation,” says Sara Axelrod, SVP, digital strategy & business development at Women’s Marketing, an agency in New York. “So whether you agreed with the execution or not wasn’t important—the point is people are dying to talk about this. The sentiment was good, and you knew it came from the right place.”

She likens this latest interest in feminine power with the nerd movement. “All of a sudden, it seemed as if those embrace-your-nerdiness efforts paid off, and we began seeing nerdy TV shows, and nerds in commercials. There’s a tipping point, and once something is resonating, advertisers quickly put it in their messages, too.”

“The conversation about feminism has certainly been reenergized because of Sheryl Sandberg and Lean In,” adds Nancy Lowman LaBadie, EVP at Marina Maher Communications, who has worked on such brands as Cover Girl, Clairol and Cadillac. “Brands are looking to empower women more, and create a stronger emotional connection.” And while those messages appeal to women in every demographic, they’ve inspired many Gen Y women to share them. Pantene is a great example, she says, “not just because the message of empowerment fits so well with its strength and shine positioning, but because there is a real call to action, to challenge yourself and others not to apologize as frequently.”

Pantene’s Labels against women, #shinestrong, its first video on gender bias, has won an impressive 46.5 million views since its launch late last year. The #BanBossy effort soon followed, generating 1 million visits on its first day, according to a spokesperson, with hundreds of thousands (including Beyonce and First Lady Michelle Obama) pledging to ditch the B word.

And as Millennials find themselves ready to move into more powerful positions in their careers, those messages are especially taken to heart. “Young women are wondering how they can move into roles with more leadership, so these message really speak to them,” LaBadie tells Marketing Daily. And they’re infinitely shareable. “Women wish for young women to find their voice, and speak their truth. It’s a wonderful thing, and a beautiful thing, so of course they want to share it with their friends.”

Many of these messages are aimed right at young parents. There’s Entrepreneur Barbie, of course. Mattel partnered with such feminist powerhouses as Girls Who Code, Rent the Runway, One Kings Lane, Plum Alley, Genuine Insights, Sugarfina and The TomKat Studio under the #unapologetic banner to bring her to life. And then there’s General Electric’s What my mom does at GE. Verizon’s Inspire her mind spot calls parents on the subtle and not-so-subtle ways they tell little girls that looks count for more than brains.

Not every strong-woman ad is earnest. Bridgestone is using actress Julie Bowen in its new campaign for DriveGuard tires, tapping all her Claire Dunphy-esque pushiness to sell tires. (In its release announcing the new ads, the company calls Bowen “the perfect voice… her enthusiasm and sense of humor about life really connect with strong, smart and bold women.”)

So how long will it last? Probably not long. For one thing, gender bias may feel like a non-issue to younger Gen Y women. And for another, points out Axelrod, it’s hard for any brand to position itself as feminist without risking ridicule among savvy Millennials, who know the difference between a genuine conversation and a pitch to sell more product. “There are very few brands that can do what Dove has done, for example,” she says, “and talk about an issue in a way that can change the way brands stand for something.”