Nook To Go It Alone 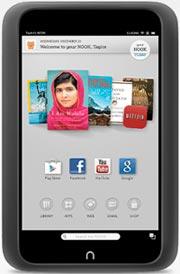 Barnes & Noble today said it would split its retail and Nook Media businesses into two separate public companies to give each a better chance of success.

"We have determined that these businesses will have the best chance of optimizing shareholder value if they are capitalized and operated separately,” said Barnes & Noble CEO Michael Huseby in a statement.

The move comes as the Nook business has continued to struggle with heavy losses, reporting a 22% sales decline in the company’s fourth quarter to $87 million, and 35.2% to $506 million for the full fiscal year. Device and accessories sales fell 30% to $25 million in the quarter, while digital content revenue dropped 18% to $62 million.

On the retail side, including Barnes & Noble stores and BN.com, revenue increased 0.8% in the quarter to $956 million. However, comparable-store sales, excluding sales of Nook products, fell 1.9%.

Barnes & Noble invested heavily in building out Nook showroom areas in its stores, giving customers the chance to demo its e-readers in person before making a purchase. Huseby said the company will “fully expect that our Retail and Nook Media businesses will continue to have long-term, successful business relationships with each other after separation.”

A Barnes & Noble spokesperson confirmed that the company would continue to sell Nook products at its retail locations. It has also turned to outside help, earlier this month announcing a partnership with Samsung to develop Nook tablets.  The step would combine Galaxy Tab 4 hardware with customized Nook software.

Huseby told GeekWire the step would help the company “focus on what we’re good at and what we can be competitive at in the current landscape where you have giants like Amazon and Apple and others who are producing tablets.”

But whether Samsung’s strong brand and market share in tablets will breathe new life into the Nook business is hardly clear. Barnes & Noble has had a hard enough time just trying to compete with Amazon’s Kindle in the core e-reader market. The larger question is whether the Nook business will fare better as a separate public company. Given its history and uncertain path forward, investors may not be eager to get on board.