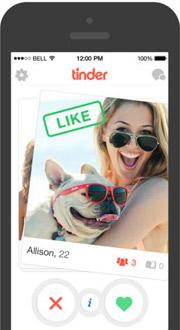 Dating apps like Tinder have captured the hearts and minds (and mugshots) of Millennials, but can marketers use them to woo the coveted demographic? Yes, says a new report by IPG’s Media Lab, which offers basic steps to that end. But it doesn’t say much about whether the effort will lead to rejection or a lasting relationship.

The study lays out some broad stats about the category: One in three single Americans have used an online dating service, and one in six couples married in the last three years met online. Tinder, the buzziest of the dating apps, with a reported valuation of $5 billion, is said to have more than 10 million users. Perhaps more intriguing to marketers may be the app’s high interaction rate, with users generating 750 million swipe-ratings a day.

The IPG study also makes the case that the distinction between dating apps and other messaging and social platforms is blurring as people seek to create and document new relationships. In that vein, there are hybrid apps like Glimpse, which aim to connect people based on their Instagram photos, and LinkedUp, that takes a similar approach with LinkedIn profiles.

To the extent they’re gaining traction, these apps open up new avenues for advertisers. “Where audiences go, brands follow, especially when those audiences are young and hard to reach on traditional media,” states the report, which highlights several marketing experiments so far on dating apps.

Not surprisingly, they’re centered on personalities or shows suited to the app’s context and user base. Shows like “The Mindy Project and “Suits” have created profiles for their main characters on Tinder. (The former also referenced the app within the show.)

The report also pointed to the other types of marketing efforts. Both Domino’s and Australia’s General Pants Co. invited Tinder users to connect for discounts.

And HowABoutWe Couples, a date-suggestion service, has expanded its online offering with special deals on activities and restaurants for users. The updated mobile app provides more location-and time-specific offers to couples looking for a change in their routine. (Parts of HowAboutWe were just acquired by Tinder owner IAC/InterActiveCorp.)

Still, IPG advises that brands with recognizable personalities or spokespeople are the most natural fit for dating and messaging apps. "If your brand doesn’t have a clear spokesperson or point of view, messaging apps may not be the best channel for customers,” the report states. It also recommends matching the campaign to the right platform, and keeping campaigns simple to avoid negative feedback.

Since advertising and marketing in dating apps is still relatively new, the study doesn’t provide much in the way of campaign results or performance. In an article last month focusing on Tinder, Michael Roberts, strategy director at Carat, indicated reactions to initial advertising in the app “have been mixed.” But he also suggests native advertising could work, “if brands approach Tinder as their users do: up for a bit of fun.”

That means being comfortable with the context of what are often simply called hookup apps, including any negative publicity about them that emerges. The app Bang with Friends was banned last year from the App Store, for instance, before changing its name to “Down.” More recently, a former marketing executive at Tinder last month sued parent company IAC over alleged sexual harassment and discrimination.