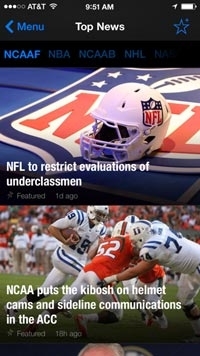 What exactly does content look like when its makers are thinking mainly about how it will be consumed on handheld screens? Until recently we have tossed about the term “mobile first” with much concreteness beyond responsive and adaptive designs. But we are only starting to scratch the surface of how new formats and modes of content production need to be developed against the radically new ways we consume and can interact with content on mobile. It is hard to imagine that the changed screen size, multimedia capabilities, unpredictable contexts, and highly intimate relationship to the device are not all unique mobile elements that beg for radically re-imagined media forms.

And so I am heartened of late to see companies digging into the opportunity for rethinking what mobile content really can and should look like that is different from desktop and other media. And talk about a company reorienting itself to mobile -- Canadian sports brand theScore started as a cable TV station whose mobile efforts proved so popular that the company sold its TV assets to Rogers and decided to focus on creating a mobile-first sport news and information experience. “It became very apparent to us that it is very difficult to serve two masters very well,” says Benjie Levy, president and COO. While the TV network had achieved high household penetration in Canada, there was hope for it to expand in the way mobile could. Levy says they were seeing a large number of their users coming from below the border, which convinced theScore that there was more “global, un-shackeled opportunity” in an app.

The staff has grown to 100, all focused on the mobile product. Initially, theScore served the game-time audience with real-time stats and scores and the buckets of data that fantasy sports players craved. Its content outside of game time was lacking, however. So they branched out to develop full-day sports information that is built from the ground up for devices. What that means is “shorter, punchier pieces that are to the point,” he says. They generate 300 to 400 discrete pieces of content each day.

But you also need to take a “layered” approach that appeals at once to news scrapers and drillers. You need to make it easy for people to get what they need at a glance, of what is their mode, but also have beneath it tons of content to satisfy the drillers. He says there was no CMS to support what they were trying to achieve, so they built one for themselves.

But being mobile-first is not just a clear-cut set of content rules and formats, Levy says. “It is a mindset.” He says that most of the people working on the app grew up with mobile. "You can’t underestimate the subtle importance of that. The people creating the content all grew up with it in their hands.”

He admits it is “tough to describe the subtleties” of mobile-first content. It tends to employ an economy of words but layers in images and embedded media to build the story. “You need related content in a seamless fashion for users who have more than 50 seconds.”

Personalized push is the other piece. The app makes it easy for people to subscribe to alerts tied to favorite topics. He says half of the app’s users have subscribed to some kind of alert, and three-quarters of those are subscribed to multiple alerts.

Interestingly, Levy does not put video high on the mobile-first priority list. “That type of content didn’t scale for us,” he says. “We found it wasn’t as well suited for the platform as the type of content we are doing.”

That is an interesting one to chew on.

Levy says so far the strategy has worked to expand theScore outside of a game-time app. Engagement during the rest of the day has tripled, but it has also increased engagement in the game-time content.