Naked Summer, Part 2: Nudity On The Rise In Scripted Programming 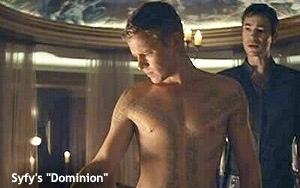 As I was writing Monday’s column about VH1’s “Dating Naked” and the unprecedented amount of bare skin on display in that series and several other recent basic cable reality efforts, it occurred to me that nudity is also on the rise this summer in scripted basic cable programs.

Due to all the time I recently spent at the recent Summer 2014 Television Critics Association tour, an almost three-week immersion into press conferences and other activities designed to inform and educate members of the press about television programming, I have fallen way behind in watching actual TV, for which a typical TCA tour leaves little time. So I haven’t seen everything I normally would have seen by now. But even a cursory viewing of current series has made clear that fresh displays of skin are everywhere. FX’s “The Strain,” TNT’s “Murder in the First,” USA Network’s “Satisfaction,” and especially Syfy’s “Dominion” come immediately to mind.

I’m used to nudity on pay cable programs and shows on streaming services -- aren’t we all? FX has been cheekily pushing the boundaries of nudity on advertiser-supported television on many of its series for many years (especially “Nip/Tuck,” “American Horror Story,” “Sons of Anarchy” and now “You’re the Worst”) with no complaints of which I am aware. Still, as far as nudity goes, basic cable is suddenly busting out all over -- not that there’s anything wrong with that.

A nudity warning at the start of a show generally means that a bare behind or two will be on display before episode’s end. In some cases it might be accompanied by a flash of the increasingly popular side boob. But mostly the issue is butts.

I shouldn’t use the word “issue,” because really, seeing a bare behind on television or anywhere else these days seems a strangely dated concern. Millennials who have grown up watching anything and everything on a number of screens and who make no distinction whatsoever between a broadcast, basic cable or pay cable network (assuming they have had access to the latter) must find it particularly puzzling that any fuss is made at all (by citizens, advertisers or the FCC) over content of any kind.

Indeed, exposed heinies now seem so utterly harmless that complaints about them invite ridicule among the young. And as the young get older, such complaints and concerns are likely to drift off into the ether.

Given that uncensored R-rated movies have been staples of home entertainment since the arrival back in the ‘80s of the VCR and the growth during that decade of HBO and other pay cable networks, it is somewhat hard to believe that a little skin here and there is even worth mentioning, which is the point of this column. Nudity isn’t an issue -- nor should it be -- as long as it isn’t raunchy or tasteless.

I guess we can refer to the exposed skin on the basic cable shows cited above as “tasteful nudity,” even if it would have sent the parents and grandparents of boomers into cardiac arrest.

Nudity on advertise-supported television, including broadcast, is nothing new. But its history has been combustible, to say the least. No discussion of this topic would be complete without mention of acclaimed producer Steven Bochco’s contributions to the presentation of skin on the broadcast networks. I believe he presented the first fast glimpse of a bare behind ever seen on a broadcast series in the 1983 comedy-drama “Bay City Blues.” He followed that many years later with the groundbreaking “NYPD Blue,” in which well-toned behinds of the male and female variety were frequently on full display. (Many advertisers and ABC affiliates raised hell when “Blue” debuted in 1993, but the network admirably stuck to its plan of making broadcast programming a bit more interesting and realistic for the adult audience.)

Daytime dramas began boldly experimenting with nudity, too -- especially “As the World Turns,” which presented an explicit (for its time) shower scene featuring one of its more attractive young couples. But just when it seemed that broadcast was going to loosen up, one of Janet Jackson’s nipples was fleetingly exposed during an ill-advised half-time show produced by MTV (itself no stranger to “controlled” nudity) during CBS’ telecast of Super Bowl XXXVIII in 2004.

Broadcast covered right up as a result of the thundering response from the FCC that followed, and has stayed that way ever since. (Broadcast violence, on the other hand, has increased exponentially during that time.) We now see all kinds of shower scenes and sex scenes on broadcast series, but the degrees to which certain parts of bodies are obscured or covered up is somewhat distracting, given what’s going on over on basic cable and everywhere else, and it’s starting to seem really silly.

Seriously, would a glimpse of a bare behind or two on an occasional episode of CBS’ “Survivor” -- a franchise famous for putting good-looking people who aren’t wearing very much in the first place through sweaty challenges in tropical locations --  send its audience into collective spasms of outrage?

Is nudity essential in broadcast and basic cable programming? Of course not. Should children be allowed exposure to it? That’s a decision for their parents -- although chances are the kids have already seen it all in on one screen or another (including their phones) long before mom and dad become aware of it. Is nudity still worth getting upset about, given the rampant violence inherent in so much filmed entertainment, including television shows and movies with which most kids are familiar? We shall see.