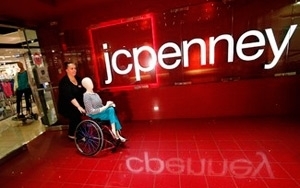 JCPenney’s turnaround is gaining ground. It reported a hefty 6% increase in same-store sales, marking the third quarter in a row that the retailer has reported growth. But Kohl’s says its quarterly sales slipped for the period.

“Our turnaround initiatives continue to produce improved financial results,” says Myron E. (Mike) Ullman, III, CEO of the Plano, Tex.-based J. C. Penney, in its earnings announcement. “In the second quarter, we gained additional market share while significantly increasing gross margin in a highly competitive promotional environment.” He says the company expects those sales to continue through the back-to-school season.

Its net sales for the second quarter hit $2.8 billion, up from $2.66 billion in the second quarter a year ago. Online sales came in at $249 million, for a 17% gain. It also says that while all regions gained, the southern and western regions performed best, and predicts that next quarter, it will also achieve same-store sales increases in the mid single digits.

The news was not nearly as upbeat at Kohl’s, Penney’s main competition in the moderate department store category. The Menomonee Falls, Wisc.-based chain says its same-store sales dropped 1.3%, while its total sales declined 1.1% to $4.24 billion. Net income came in flat for the period, at $233 million.

The company says it was encouraged that sales built momentum as the quarter progressed, and turned positive in July.

There are some indications, however, that both JCPenney and Kohl’s will have their struggles as the back-to-school season continues. According to YouGov BrandIndex, the brand consumer perception research service, parents considering buying back-to-school clothes at Penney's fell from 26% to 23%. Kohl’s also had a drop in purchase consideration, as did Sears, Charlotte Russe, Nordstrom, and Bloomingdale's.

But in terms of a combined measure of purchase consideration and value perception, a spokesperson for the index tells Marketing Daily that Walmart, Target and Old Navy rank far above all other brands, and they also have had the biggest gains in ad awareness.