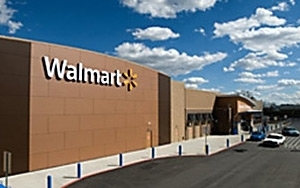 In a further sign that consumers are disenchanted with Walmart, the retailer says its second-quarter same-store sales fell 0.3% in the U.S., and that traffic at its stores declined 1.1%. And it lowered its financial forecast for the full year, citing pressures from lower sales in the U.S., as well as rising healthcare costs. Walmart estimates that next quarter’s sales results are likely to be flat as well.

Results at its small-store formats, Neighborhood Market, were considerably perkier, with comparable sales rising 5.6% for the period. Earlier this year, the retailer announced plans to goose the expansion of that format, opening an additional 22 stores this quarter, and expects to have added up to 200 new units by the end of the year.

Conceding disappointment with the results, President and CEO Doug McMillon said in its earnings announcement that the company is pleased with gains in its e-commerce business. “We see opportunities to improve in merchandising, pricing and store level service in our supercenters, and we are working to close those gaps,” he says. “Our investments in e-commerce and mobile are very important, as the lines between digital and physical retail continue to blur. Our customers expect a seamless experience, and we’re working to deliver that for them around the world.”

As Walmart’s no-growth quarters continue to pile up — this is its seventh consecutive quarter of  declining traffic — OUR Walmart, a group representing the labor rights of Walmart workers, blamed the weak results on its employment practices. “Walmart’s weak sales once again confirm what experts and thousands of shoppers and workers have been saying for years,” the group says in an email reaction to the earnings. “The Walmart model of poverty jobs and under-staffed stores doesn’t just hurt workers, it hurts the company’s bottom line.”

Separately, a new release from Kantar Retail shows that Walmart is maintaining its low-cost advantage for consumers, albeit by a slimmer margin. Walmart’s basket is now just 1% less expensive than Target’s, which reflects the smallest price gap since the June 2012 study. “Walmart’s slightly weakened stronghold on price leadership shows the difficulty in creating basket separation based on price,” writes Laura Kennedy, a principal analyst at Kantar, in the analysis. "These results emphasize the need for both retailers to pursue alternative methods to drive impression and value perception by their shoppers. The smaller price gap seems to reflect Walmart’s general shift toward a more nuanced and customized approach to Every Day Low Prices positioning.”