Premature Prognostication About The Fall Freshmen On Fox And The CW 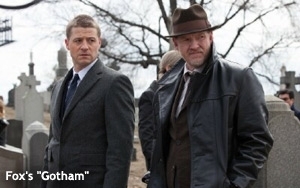 Last week I offered my thoughts and observations about the new series set to debut this fall on ABC, CBS and NBC. Now here’s a quick take on the freshmen shows coming to Fox and The CW.

As I stated in last week’s column, fall pilots from all of the networks have been available to journalists, advertisers and others since May or June. It is understood by everyone that they may not be officially reviewed without the approval of their networks because many of them are going through creative changes or simply being tweaked on the technical level. But after working with these new shows for almost three months it doesn’t seem unreasonable to begin offering carefully considered opinions about them, with the responsible caveat that these are not official final reviews.

Fox has several interesting new shows on deck for fall, but the network is having such considerable problems with its returning shows -- from the significant decline of “American Idol” to the disappointing performances of so many of its signature comedies -- that most of its freshmen may not be strong enough to thrive in so uncertain an environment. The lone exception is “Gotham,” one of the most buzzed-about new shows on any network and one that has had the extreme good fortune to be paired (on Monday nights) with “Sleepy Hollow,” one of the few new hits last season on any broadcast network.

Together, this pair could make Fox a formidable competitor on Monday nights. But “Gotham” has its work cut out for it. It has an interesting concept, simultaneously exploring the early years of the title city’s famous police commissioner, Jim Gordon, during his early years as a detective; the childhood of young Bruce Wayne, who is freshly traumatized after witnessing the brutal slaying of his parents, and the many troubled and/or twisted young people who will eventually become Batman’s greatest enemies.

“Gotham” is well made, if somewhat violent and unrelentingly dismal. What remains to be seen is whether or not there is an audience for what is essentially an interesting new approach to a classic superhero franchise without the superhero in it.

Fox also has the very intriguing “Red Band Society,” a new youth ensemble serial unlike any ever seen before in that most of its characters are gravely ill young people. Can such a concept catch on for the long-term -- or even the short term? It seems to be asking a lot of its audience. Still, I’m prepared to be surprised here: If “Red Band” becomes the feelgood series of the season it will be one of the big television stories of the year.

The rest of Fox’s fall freshmen are more problematic. “Mulaney” is a standard-issue sitcom built by and around a comedian/comedy writer that doesn’t seem distinctive enough to stand out as anything special. The ambitious new reality series “Utopia,” which is based on a successful Dutch franchise in which people are deposited somewhere to literally build a new society from the ground up, will have to catch on quickly because Fox has dedicated one hour on two nights (Tuesday and Friday) to this bold experiment. (It will actually debut on Sunday, September 7, and then continue in its two assigned time periods.) My advice to all concerned: Maintain a fast pace and keep this show moving. So many gimmicky reality series die premature deaths in part because they are so repetitive, constantly showing the same footage over and over and reminding the viewer of what he or she saw five minutes earlier.

And then there is “Gracepoint,” an Americanized remake of the gut-wrenching British drama “Broadchurch.” My early take on this is that “Gracepoint” is very difficult to watch if one has previously experienced “Broadchurch,” especially because David Tennant stars in both (with different accents). But since most people have not seen “Broadchurch” the network could have a success here -- if the thoroughly depressing subject matter doesn’t turn viewers off.

The CW has only two new series on tap for fall -- “Arrow” spinoff “The Flash” and telenovela adaptation “Jane the Virgin.” Previews for both shows were very well received in May during upfront week and the buzz for both has only continued to build over the summer.

Without qualification, “The Flash” is one of the best and most promising new broadcast series of the entire fall 2014 freshman class. It is so solid, in fact, that failure seems incomprehensible -- even if this is a series built around a character whose only power is the ability to run very, very fast.

“Jane the Virgin” is hardly a slam dunk, but it is a clear favorite among critics, so media support will be substantial. The pilot is so engaging that it is difficult to imagine that anyone will watch it and elect not to stay with it at least for a few weeks to see how the characters handle the many sudden complications in their lives that result from Jane improbably becoming pregnant while retaining her virginity. If “Reign” could rule last season, and if “Hart of Dixie” and “Beauty and the Beast” can survive for as long as they have, I think there is every reason to believe that “Jane the Virgin” will be with us for several years, even after the title character becomes “Jane the Mother.”