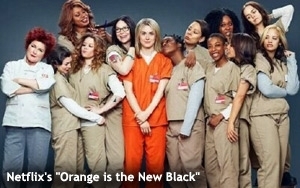 esterday I made my predictions and stated my preferences for the Drama Series categories in this year’s Emmy Awards. Today I shift focus to those concerning Comedy Series. It’s worth noting that two of the early Comedy wins during last season’s Emmy telecast set the tone for the consistently surprising awards that would follow: Merritt Wever of Showtime’s “Nurse Jackie” for Outstanding Supporting Actress in a Comedy Series and Tony Hale of HBO’s “Veep” for Outstanding Supporting Actor in a Comedy Series. Count on the comedy categories to liven things up again this year, especially if AMC’s “Breaking Bad” dominates the Drama Series honors.

My predictions and preferences for the Movie and Miniseries categories – arguably more exciting than they have been in years -- will follow tomorrow.

Should have been nominated: “Hot in Cleveland” (TV Land)

Yes, I said it. I consider TV Land’s “Hot in Cleveland” to be one of the funniest and most reliably entertaining comedies on television and I think it should have been acknowledged here. The stars of this show never hit a false note, Betty White remains a wonder and the recurring cast and guest stars are always a joy to watch.

Furthermore, “Hot” never fails to make me laugh. The only other comedy series I can say that about is CBS’ “The Big Bang Theory,” which would probably take home the prize this year were it not for the industry’s obsession with Netflix’s “Orange is the New Black,” a very well-done show that is arguably much more a drama than a comedy. Unless this is the year of “Big Bang” it won’t surprise me if FX’s “Louie” squeaks past “Orange” as it is the other comedy with which so many people seem to be obsessed. Or Emmy might take the easy way out and give a fifth consecutive award to the still vital “Modern Family.” My personal favorite of the group is HBO’s “Silicon Valley,” a show I expected to find boring and annoying given its subject matter, but which I have found more engaging and in-the-moment than most. HBO’s “Veep” is also nominated, but I think it will be recognized in other categories (read on).

Should have been nominated: Robin Williams, “The Crazy Ones” (CBS)

Robin Williams was ferociously funny and often quite touching in what would be his final TV role. I’m still puzzled as to why voting members of the Academy of Television Arts & Sciences didn’t recognize his work. Jim Parsons of “The Big Bang Theory” and Louis C.K. of “Louie” would seem to be the likeliest winners given the surging popularity of their shows, but I think Ricky Gervais of “Derek” could be the big surprise spoiler here as he was a few years ago when he unexpectedly won in this category for his work in HBO’s “Extras.” My own choice would be the absolutely fearless William H. Macy of Showtime’s “Shameless” for his portrayal of an alcoholic drug addict who refused to give up his wicked ways even when enduring the agony of liver failure. His performance was darkly dramatic and often somewhat repulsive but also, when least expected, quite comical. The other nominees here are Matt LeBlanc of Showtime’s “Episodes” and Don Cheadle of Showtime’s “House of Lies.”

Should have been nominated: Patricia Heaton, “The Middle” (ABC)

Like most of her cast mates on ABC’s “The Middle,” Patricia Heaton is currently one of the most egregiously overlooked actors on television. Nothing I say here will change that, but shame on ATAS for failing year after year to recognize the genius in this show and its’ amazing ensemble. That said the six women nominated are all terrific and any one of them could take home the top prize. I predict a three-peat for Julia-Louis Dreyfus of “Veep” and I can’t really imagine anyone arguing about that. My own choice would be Edie Falco of Showtime’s “Nurse Jackie,” who delivered a take-no-prisoners performance this season as her drug-addicted character willfully destroyed the lives of everyone around her before demolishing herself. (I can’t imagine how this show will continue next season, but I also can’t wait to find out.) Since dramatic performances are all the rage in the comedy categories this year a win for Falco would not be a bad thing. I’ll be shocked if Lena Dunham of HBO’s “Girls,” Melissa McCarthy of CBS’ “Mike & Molly,” Amy Poehler of NBC’s “Parks and Recreation” or Taylor Schilling of “Orange is the New Black” takes home the award, but I won’t be unhappy about it.

Should have been nominated: Keith David, Fox’s “Enlisted”

Keith David gave one of the great comic performances of the year on Fox’s much-abused “Enlisted,” a fine show with a promising future that couldn’t hope to survive given the haphazard way that the network scheduled it. But Fox will likely triumph in this category anyway with a win for critical favorite Andre Braugher of “Brooklyn Nine-Nine.” My own choice would be a second consecutive win for the fiercely funny Tony Hale of “Veep” or a long-overdue win for Jesse Tyler Ferguson of “Modern Family.” The other nominees here are “Portlandia” star Fred Armisen, Ty Burrell of “Modern Family” and Adam Driver, the true breakout star of "Girls."

Should have been nominated: Eden Sher, “The Middle”

As I stated above there is no satisfying way to explain the cold shoulder that “The Middle” and its talented cast receive every year. It is what it is. I believe the competition in this category comes down to Allison Janney of “Mom” and Kate Mulgrew of “Orange is the New Black.” I would choose Janney, a four-time Emmy winner for her dramatic work on “The West Wing.” Who knew she had such amazing comedic talent and such perfect comic timing? But there will be no complaints from me if Mulgrew takes home the award. The other nominees are Mayim Bialik of “The Big Bang Theory,” two-time winner Julie Bowen of “Modern Family,” Kate McKinnon of NBC’s “Saturday Night Live” and Anna Chlumsky of “Veep.”