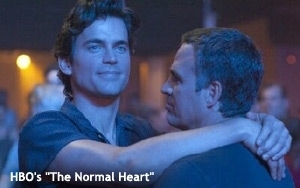 Most of us focus on the excitement of the Drama and Comedy Series categories when watching the Emmy Awards. But this year the nominations for Movies and Miniseries and the actors who starred in them could collectively eclipse the rest of the show. Much of the credit for this goes to FX, which has thrillingly revitalized the Miniseries competition with the “Fargo” and “American Horror Story” franchises. I would also make the case that HBO’s “True Detective” and its lead performance by Matthew McConaughey brought a lot to the Miniseries arena, but HBO saw fit to mystifyingly define it as a Drama Series.

As with my columns about the competition in the Drama Series and Comedy Series categories earlier this week, what follows are my predictions and preferences -- and where called for, mention of obvious oversights among the Movies and Miniseries nominations. (Note: The Academy of Television Arts & Sciences this year chose to separate movies and miniseries into categories of their own but continues to lump together performers from both.)

Should have been nominated: “An Adventure in Space and Time” (BBC America)

BBC America’s “An Adventure in Space and Time,” which depicted the real-life drama surrounding the creation of the first “Doctor Who” series way back in the ‘60s, was an entertaining delight that celebrated a television milestone. As such it would have been nice for voting members of ATAS to recognize it.

“The Normal Heart” will win, while PBS’ outstanding “Sherlock: His Last Vow” likely would have taken home the award if “Heart” weren’t among the nominees. But the others in this category -- National Geographic Channel’s “Killing Kennedy,” HBO’s “Muhammad Ali’s Greatest Fight” and Lifetime’s “The Trip to Bountiful” -- were all very special in their own right.

No need for arguments or debates: “Fargo” is as certain to win here as “The Normal Heart” is in the Movie category. I would continue to support “Fargo” as the best choice even if “True Detective” had been included here. On the subject of HBO playing a bit fast and loose with category definitions, what is the final season of “Treme” -- a drama series by every measure -- doing in the miniseries category, other than to grab some of the recognition it never received in the category where it belongs? (I said the same about the final season of the Showtime comedy series “The Big C” last year, when it was repurposed as a miniseries for maximum award potential. That ploy worked; “Big C” star Laura Linney won Outstanding Lead Actress in a Movie or Miniseries.) The other nominees are “American Horror Story: Coven,” BBC America’s “Luther” and Starz’ “The White Queen.”

Outstanding Lead Actor in a Miniseries or a Movie

This is as daunting a category as any in this year’s Emmy competition. How to choose between Billy Bob Thornton and Martin Freeman, both at the top of their game in “Fargo”? (I would give it to Freeman, even though I still can’t shake the intensity of Thornton’s performance.) Mark Ruffalo in “The Normal Heart” and Benedict Cumberbatch in “Sherlock: His Last Vow” were also sensational. I think a win for “Fargo” is very likely, but this could be a four-way race, with Thornton and Freeman canceling each other out and putting Ruffalo and Cumberbatch in play. The other nominees are Chiwetel Ejiofor for Starz’ “Dancing on the Edge” and Idris Elba for BBC America’s “Luther.” A win for either would be a major upset but not at all undeserved.

Outstanding Lead Actress in a Miniseries or a Movie

I can’t imagine Cicely Tyson not being honored for her work in “The Trip to Bountiful” 40 years after her historic double win in this category for “The Autobiography of Miss Jane Pittman.” What an opportunity! (Tyson was honored as Outstanding Lead Actress in a Miniseries or a Movie and also received a special Emmy for Performance of the Year.) Of course the formidable Jessica Lange of “American Horror Story: Coven” remains a strong contender, while Minnie Driver’s acclaimed performance in Lifetime’s “Return to Zero” could result in a surprise win. But I think this will be and should be Tyson’s night. The other nominees are Sarah Paulson for “American Horror Story: Coven” and Helena Bonham Carter for BBC America’s “Burton and Taylor.”

Outstanding Supporting Actor in a Miniseries or a Movie

Should have been nominated: Will Rothhaar, “Killing Kennedy”

Will Rothhaar deserved to be included in this category for his haunting portrayal of Lee Harvey Oswald in “Killing Kennedy,” perhaps more so than Jim Parsons or Alfred Molina for their contributions to “The Normal Heart.” Then again, every member of the “Heart” cast delivered an award-worthy performance, so impossible choices had to be made. (It’s a shame also that there wasn’t room for Blair Underwood for “The Trip to Bountiful.”) The winner will be either Colin Hanks of “Fargo” or Matt Bomer. I’m going with Bomer, and not simply because of the physical transformation he underwent during filming. The other nominees are Joe Mantello -- also sensational in “Heart” -- and Martin Freeman for “Sherlock: His Last Vow.”

Outstanding Supporting Actress in a Miniseries or a Movie

This category may be the toughest of all to call. There is big buzz for Allison Tolman, the critics’ clear favorite and, from where I sit, the most deserving of an award in a category filled with bold performances. But one should never underestimate the popularity of “Normal Heart” nominee Julia Roberts or the power of HBO. Last year’s winner in this category, the legendary Ellen Burstyn, is highly regarded by her peers and could also pull an upset. The three women nominated for “American Horror Story: Coven” -- Frances Conroy, Kathy Bates and Angela Bassett -- were great fun to watch as they transcended their often cartoon-like material, but I can’t imagine any of them taking home the award.