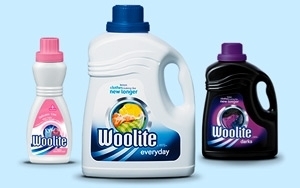 Three years ago, RB, formerly known as Reckitt Benckiser, and Euro RSCG rebranded RB's Woolite as an "edgy" brand. The company spent a reported $15 million on the "The Torturer" campaign - directed by horror guru Rob Zombie - to illustrate how Woolite rescues clothes from the torture of washing them with heavy detergents.

Now, Woolite is returning back to the more typical and familiar concept that Woolite keeps clothes looking new. Developed by Havas, the new campaign highlights how Woolite helps clothes stay the perfect fit, which then boosts women's confidence by feeling and looking great.

Jeannie Mai, host of the Emmy-winning Style Network series "How Do I Look?" and one of the co-hosts on "The Real" daytime talk show, serves as the campaign's brand ambassador and appears in national TV and social media advertising.

Mai is featured in a series of digital videos, posted on the brand's Facebook page, in which she adds her unique take on style analysis by looking deeper into the psychology behind clothing. These thoughts are tagged as "#Wearapy" to track across social media.

"We know that women love their clothes, but caring for them is a different story," said June Risser, Marketing Director for Woolite USA. "The new Woolite Everyday formula helps clothes keep the perfect fit wash after wash. Woolite's mission is to get women across the country to think about how they care for their clothes. We are excited to work with Jeannie Mai, who embodies the voice of our clothes-loving consumer, in helping women preserve the love affair they have with their clothes."

Mai was selected based on her ability to bridge the fashion world, where shoppers are attracted by colors and fabrics that make them look and feel their best, with the laundry world, where Woolite helps care for the clothes women love.

The campaign is one of the first efforts under the new multi-year, nine-figure global partnership announced by RB and Facebook earlier this summer. The two brands are integrating members of their global sales, marketing and creative teams to connect RB brands like Lysol, Mucinex, and Air Wick with Facebook users.