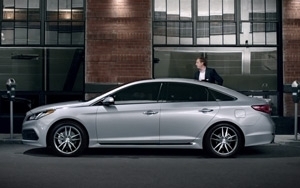 Jeff Bridges, the voice of Hyundai in the U.S. for the past seven years, is hitting the proverbial road. The company has tapped actor Paul Rudd as his replacement. Rudd begins his duties with the new campaign for the 2015 Hyundai Sonata.

“We were looking for a voice that could be recognizable and relatable to a new generation of car buyers,” says Steve Shannon, VP of marketing for Hyundai Motor America. “Rudd can be serious, humorous, informative and entertaining all at the same time. It’s his modern sensibility that we knew would be a perfect match for today’s customers.”

Rudd’s first voiceover is in “Co-Pilot,” about the back-seat driving mentality. As two couples head into San Francisco for a night on the town, they’re joined by a man in the back seat. “The backseat driver” is quickly schooled by the Sonata’s safety and navigation system as it leads the group to their destination. Innocean, U.S.A. is Hyundai's AOR.

“Hyundai’s relationship with Jeff Bridges is one of the longest in the industry -– narrating ads for industry-leading vehicles and programs such as Hyundai Assurance,” said Shannon.

Rudd is a comic actor who has had featured roles in such films as "Anchorman 2," "Knocked Up," and "The Perks of Being a Wallflower." He is currently filming "Ant-Man" slated for 2015, according to IMBD.

The Sonata campaign includes a new online video series about a 3,000-mile drive by the Sonata across the U.S.and a Google-powered game.The 3,000-Mile Test Drive focuses on how people from different trades and walks of life rive the car and the features they use.

Greg Braun, ECD at Innocean says the idea for the cross country drive comes from the fact that every Sonata off the line in Montgomery gets a short test drive. "Since the 2015 Sonata is totally new we wanted to go big," he says.

A series of videos along the route feature actor Jeff Ellingson, who does the drive. In short videos, he picks up notables along the way, each one aligned with a particular feature. At one point it's Minnesota trucker Harold Heaney, who has a claim to fame for having driven a rig 5 million miles without an accident. Racer Rhys MIllen drives the car up Pike's Peak. The drive ends at Hyundai's design studio in California after a stop at Google headquarters.

Braun points out that the online component uses Google Maps offering a 360 degree of the car and urging viewers to guess where the car is among the locations through which it has passed on its cross country trip.