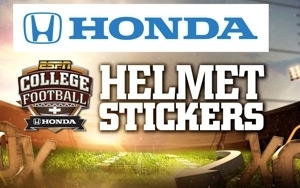 Honda has inked a a multi-year agreement with ESPN that ties with the automaker's Honda Stage music platform that launched earlier this year. The campaign centers on college football and ESPN's SportsCenter, intended to reach a younger audience for vehicles like the compact car Fit.

“ESPN college football is among the most-watched live television programs and represents a great opportunity to leverage our investment in music and sports to connect the Honda brand with an engaged audience of young and active viewers while showcasing the latest Honda vehicle offerings, including the all-new 2015 Honda Fit,” said Tom Peyton, AVP of marketing at American Honda.

Honda, which is featured in all 2014 ESPN College Football telecasts, has branding on set, both for the brand and for its Honda Stages, and custom content on the 8 a.m. segment of SportsCenter, per the companies. Unique musical montages featuring Honda Stage artists during ABC College Football Afternoon – First Half Highlights.

Phil Hruska, Honda's manager of media strategy tells Marketing Daily that Honda Stage has been doing a lot of performances throughout the year via partnerships with Live Nation, Clear Channel, Revolt, and Civic Tour, comprising live stage events. He says the artists from these are used in the ESPN program. "We select artists across these various platforms and partners to appear in the music montages. Honda Stage presents Amp’d Up lets us bring value and promotion to the artists that perform on Honda Stage, raise the profile for the new music platform and create awareness and engagement through the use of music."

Hruska adds that the videos Honda is delivering for the program are from taped live performances. "The ad buy is of course the entry point to our relationship with ESPN." He says that while the effort touts the new 2015 Fit, the program isn't focused exclusively on the car. "We are in the Fit launch window so that is the priority vehicle at this time. But tactically we would use different commercial adjacencies and different billboard reads to highlight different priority vehicles."