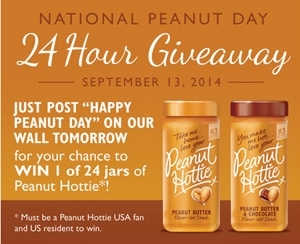 Peanut Hottie, a year-old peanut-flavored hot drink mix that has taken off in the U.K., is launching in Walmart in the U.S. To promote the launch, the new brand is offering sample giveaways on Facebook on Sept. 13, National Peanut Day.

A jar of the drink mix — the brainchild of a food marketing consultant — will be given away each hour during that day. To earn chances to win, consumers will be asked to post “Happy Peanut Day” on the brand’s U.S. Facebook wall.

Made from American-grown peanuts, the beverage is prepared like instant cocoa, by stirring in hot water. It contains no caffeine or artificial additives or colors, and has under 100 calories per serving.

The original flavor and a new variety, peanut butter and chocolate, hit the shelves of nearly 2,500 Walmart stores on Sept. 7.

In the U.K., the original flavor launched in Sainsbury's last October and, thanks to strong sales, was picked up by Waitrose and Booths in February. This month, it's also debuting in Tesco, at which point it will be in approximately 1,200 stores, which "is huge, within the U.K. market," Lisa Gawthorne, co-creator of Peanut Hottie, tells Marketing Daily.

Gawthorne — who with partner Karl Morris offers consumer goods sales, marketing and distribution services through their five-person, London-based firm Bravura Foods — says she hit on the idea for Peanut Hottie two years ago. After noting the tasty result when she washed down a spoonful of peanut butter with hot tea, she had Morris try the same. They determined, to their surprise, that there was no hot peanut butter drink in existence, and knew that they had a winner.

In the U.S., where Bravura is working on the launch with The S3 Agency, the initial marketing plan will focus on building consumer awareness through outreach to magazine editors, influential bloggers and other media, combined with promotions and engagement activities on Facebook and Twitter, reports Gawthorne. (The @PeanutHottieUSA Twitter account already has nearly 3,000 followers.)

Work on expansion into European and other markets is also underway.

"We intend to establish Peanut Hottie as a leader in the hot beverages category, and carve out a new category," Gawthorne declares.