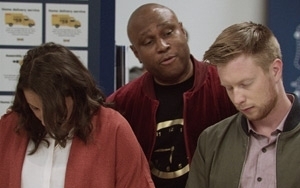 I'm starting to sense a correlation between home ownership and personal physical decay. As a venerable cheapwad, I view every maintenance-related task as a mountain to be conquered, as a prize toucan to be poached, as a moat to be hurdled in super-slo-mo while extending my tongue Jordan-style. Unfortunately, as a full-contact participant in all life endeavors not involving shellfish, I tend to take my missions a bit too seriously.

Take last Saturday, in which the attempted assembly of garage furniture left me with a sunburn and an immobilizing leg brace that extends from my boy bits down to my ankle. Should any person suffer to this extent for his art? Or unintentionally prompt the neighbors to wonder if he is afflicted with some strain of undiagnosed garage-rage? Perhaps, but hey - it’s a really nice cabinet.

I blame IKEA for this. The company’s growth in the U.S. happened to coincide with my buying-stuff adolescence. I was on my own for the first time and, for reasons best explored with a therapist, determined to do everything myself. The delivery of a patented IKEA flåtbox packed with almost-wood panels, cryptic assembly instructions and inch-long Allen wrenches gave me a palpable buzz. Two days and nine hours later, when I completed putting together whatever awesomely nonsensically named item I was putting together, I felt complete. IKEA product assembly bolstered my sense of self. My 20s were not a proud decade.

So even as the company’s wares have declined in quality (says the très fancy owner of exactly two Room and Board furniturestuffs), I’ve always had a soft spot for the IKEA brand. And the last few weeks have provided ample opportunity to open my heart even wider, as IKEA has gone on one of the great brand-video rolls of our time, filling the content chasm left agape when white people stopped dumping water on each other on Facebook.

I’m talking about the one-two punch of IKEA’s brand videos for its 2015 catalog and its bedroom/bathroom collection. Technically they were produced by separate IKEA entities - the former is attributed to IKEA Singapore, the latter to the brand mother ship - but taken together they paint a picture of a brand that one, knows what excites and amuses its consumers and two, can self-deprecate with the best of ‘em.

That second part is what distinguishes IKEA from just about every other brand out there, retail and otherwise. Brands, or more accurately brand-minders, tend not to have a sense of humor about themselves. Affronts are answered with louder affronts; perceived slights are tucked away for later recall, high-school-trauma-style. IKEA? They’re all “eh, whatever. Have some meatballs, ja?”

That’s why the 2015 catalog video, in which IKEA easily and savagely mocks Apple’s so-clean-and-so-precious ads, connects so strongly. In the clip, IKEA “chief brand guru” Jörgen Eghammer runs through the product features of the catalog, which he dubs a bookbook (“it’s not a digital book, it’s not an e-book”). Among those features: password protection (“which is voice activated: ‘Excuse me. That’s mine.’”), 328 “high-definition pages” and eternal battery life. Does the clip administer a final flick to Apple’s proboscis by overtly slapping a trademark symbol on “bookbook” at its conclusion? Indeed it does.

Mockeries of Apple’s marketing are a content genre of their own at this point. IKEA’s take, however, registers as A-grade satire because it doesn’t exaggerate. It very, very literally outlines every feature of the new catalog, right down to the page-turning instructions (“to start browsing, simply touch and grab - right and left to move forward, left to right to move backwards”). There are no funny hats or broad caricatures (huge props to the costumer who outfitted the guru in a casual-yet-not V-neck t-shirt rather than the Jobsian wardrobe of black-on-blue). Subtlety, as always, is underrated.

Of course, there’s nothing subtle about a stunt in which Vegas mainstay Justin Tranz hypno-convinces a couple that they’re living in the future - first with an obnoxious tween, later with that tween’s immodest live-in boyfriend. That’s the central conceit of IKEA’s “The Time Travel Experiment,” which is as grand a goof as you’re likely to see on your whatever-screen this year.

I use the word “goof” with great reverence, because the mini-series (more installments will be rolled out during the fall) feels like something a bunch of college kids might’ve dreamed up after a few too many pulls on the peace pipe. The scenarios are simple yet allow for plenty of weird, anarchic turns: adorable tween girl rejects her birthday present in a less-than-adorable manner, teenage girl chafes against parental disapproval of her boyfriend (“your inner crystal - it’s black!”), newly moved-in boyfriend wanders around the house naked, etc.

The production values are nil; the videos appear to have been filmed in full view of a Saturday afternoon storeful of customers. Still, they manage to showcase IKEA’s bedrooms and bathrooms without actually showcasing them. Even as you’re giggle-snorting at lines like “can you hand me the lotion? I gotta stay wet, like fish,” some small part of you is like, “Hey, that’s a nifty little shower cubicle.” The only thing missing here is a buy-now link.

The next IKEA hypnosis-time-travel clip drops - do the cool kids still say “drops” instead of “debuts”? if not, they really should - on Wednesday. If it’s half as arch as the first one, count me in.