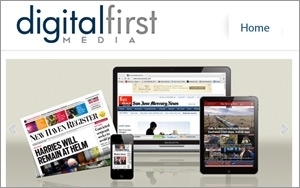 Yet another big publisher may be exiting the newspaper business, as Digital First Media considers selling some or all of its assets, according to a report in the The Denver Post, which is controlled by Digital First.

Digital First CEO John Paton said that the company had retained UBS Securities to help “evaluate and consider strategic alternatives” for a sale. However, the process is still at a very early stage, and no decisions have been made.

While selling the entire company is on the table, Digital First might also choose to sell selected regional clusters while retaining other newspapers, or decide not to sell any properties at all, depending on market interest and financing possibilities.

The Denver Post notes that Digital First Media is the second-largest newspaper publisher in the U.S. when measured by circulation, reaching 75 million people per month via 76 daily and Sunday newspapers, 160 weeklies and other print and digital news products. Its flagship properties include the San Jose Mercury News, The Denver Post, the New Haven Register, the St. Paul Pioneer Press and the Salt Lake Tribune.

The company was created in September 2011 by the former Journal Register Co. to manage both JRC and MediaNews Group, after Alden Capital bought JRC and took a stake in MNG. In September 2012, JRC entered into Chapter 11 bankruptcy protection and initiated an auction process. Then in April 2013, Digital First Media sold the assets of JRC to 21st CMH Acquisition Co. -- another Alden company, which subsequently renamed JRC the 21st Century Media. In December 2013, MediaNews Group finally merged outright with 21st Century Media.

Since then, the company has been moving to cut costs, fueling speculation of an impending sale by Alden Global Capital. In April of this year, Digital First closed Project Thunderdome, an initiative launched in 2012 with the goal of reducing costs by providing national news to local publications from a centralized bureau in New York City.

Digital First is just the latest in a series of companies looking to get out of the newspaper business. Most recently, last month Gannett Co. -- the country’s largest newspaper publisher -- announced that it would spin off its newspapers to focus on its broadcasting and digital properties. Tribune Co. completed a similar spinoff of its own ailing newspaper properties in August.