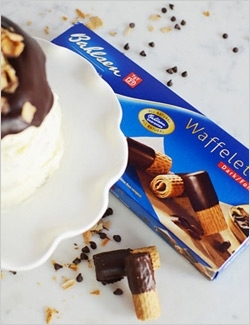 European cookie and biscuit maker Bahlsen, which is launching a push to expand its business in the U.S. and Canada, is kicking off new marketing efforts with a promotion celebrating the company's 125th anniversary.

The grand prize winner of the "Let the Good Times Roll" contest — Mandy Kellogg Rye, the blogger behind Waiting On Martha, for her Dark Chocolate Ganache Cookie Cake (shown above) — is being announced on Sept. 16, a date chosen because it's the most common birth date in the U.S. The prize is tuition to attend Le Cordon Bleu's three-day Bleu Ribbon Kitchen, including a trip for two to one of the school’s U.S. locations.

All 15 of the cake recipe entries will be featured on Bahlsen's U.S. Facebook page, starting with the winning recipe and “rolling out” one per day through the end of September. In addition, Rye is featuring both the from-scratch version of her winning cake recipe and an easy (using boxed cake mix) version on her blog.

Founded by Hermann Bahlsen in Hanover, Germany, Bahlsen has been selling its products in the U.S. since the 50's, and opened North American sales offices in the 60's. But the North American division (based in East Hanover, N.J.) was officially created just last year, according to Federico Meade, who became the division's president this past March.

Bahlsen believes it's well-positioned to capitalize more aggressively on the growing demand for premium products, and in particular for affordable indulgences.

"Our brand is about bringing the taste of luxury to everyone, every day," Meade tells Marketing Daily, noting that a package of Waffeletten, for example, generally sells for under $4. "That's why a birthday theme was perfect for our anniversary celebration. Everybody has a birthday, just as everyone should enjoy some sweetness in their lives each day."

The company, which already sells 17 varieties in the U.S., has been developing new products for the North American market. Meade says that the response from focus groups has been enthusiastic, and some of the launches will start next year.

The plan to increase brand awareness and sales in North America (and the U.S. in particular) calls for employing social media and public relations, as well as redesigning Bahlsen's U.S. Web site, working with The S3 Agency, Meade reports.

The family-owned company, today run by the founder's grandson, Werner, is the leading cookie/sweet biscuits brand in Germany, and one of Europe's leading manufacturers in the category. It makes its products at five sites in Europe, exports them to more than 80 countries, and has annual sales in excess of £400 million, according to its U.K. Web site.

Bahlsen is throwing a party in Germany to celebrate its anniversary, and picking up the travel tabs for all of its employees (more than 2,000 worldwide) to attend, notes Meade.