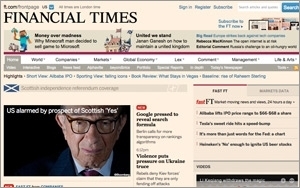 The venerable British business newspaper The Financial Times has unveiled a major redesign of its print edition, with a new look and editorial features intended to keep pace with the needs of the contemporary reader — but don’t worry, it will still be pink.

On the visual front, FT’s new look includes a redesigned front page with prompts for easier navigation, new color graphics and data and a new custom typeface, Financier, developed especially for the newspaper. On the editorial front, the revamped FT includes a new trends feature highlighting emerging themes, while Friday editions will include a special section devoted to key executive decision-makers in the UK corporate world.

Monday editions will also include a new sports column, alternating weekly between a data-driven feature focused on sporting statistics, and “Sporting View,” covering sporting business and management. Finally, each edition of the FT includes an index listing companies, sectors and people mentioned in the newspaper’s companies section.

The publishers are promoting the new, redesigned FT with a global brand campaign, developed by Adam&EveDDB, featuring a new end-line: “It is what you know.”

FT CEO John Ridding stated: “This investment underscores our confidence in the unique and lasting value of print, which is profitable on its own before advertising. It is an important part of our multi-channel offering for many readers, who increasingly consume FT journalism in multiple formats. This refresh provides our audience more value and choice.”

On the digital side, last month the FT plunged into the emerging field of wearable technology with a new fastFT app delivering news to the Samsung Gear S smartwatch. The new app, developed in collaboration with Spritz, automatically scrolls through news content at a speed chosen by the user.