'The View' From Here: All Eyes On Rosie O'Donnell As Revamped ABC Show Begins 18th Season 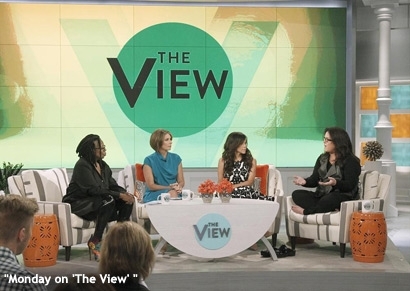 “The View” is nothing if not personal.

“Like bad gas, we have returned!” Whoopi Goldberg declared in one of the show’s earthier moments Monday morning as she ushered in its 18th season.

It was the long-awaited first installment in this ballyhooed season of change following a much publicized revamp over the summer.

Goldberg, 58, is the only co-host to return from last season.  Gone are Barbara Walters, Jenny McCarthy, Sherri Shepherd and long-time executive producer Bill Geddie. Replacing them are dimple-cheeked Rosie Perez; Republican Party operative Nicolle Wallace, returnee Rosie O’Donnell, and Bill Wolff, the first new executive producer this show has had since its premiere 17 years ago.

They’ve moved into a new, redecorated studio in New York where the newbies made themselves right at home on Monday.

It was unclear whether Whoopi Goldberg actually suffers from “bad gas” (your guess is as good as mine), but on this show we learned a lot about the sufferings of Rosie O’Donnell. Among other things, Rosie, 52, revealed that she lost 50 pounds (from a personal high of 235) following surgery to combat obesity following a heart attack two years ago, she has a touch of sciatica, and she suffers with depression -- a subject that arose when the conversation turned to the topic of Robin Williams’ death earlier this summer. During the show, Rosie O. made the sweeping (and inaccurate) generalization that all prizefighters and football players are prone to violence out of the ring and off the field. And she revealed that she has refused to see any Woody Allen movies since rumors began circulating years ago that he may have abused Mia Farrow’s children (allegations that have never been proven).

For her part, Whoopi revealed that she too has a weight problem, admitting that she maxed out at 217 pounds not too long ago.  She also announced that she recently became a great-grandmother with the arrival in her family of a baby girl (whose picture was then shown) whose name is Charlie Rose. Yes, like you, I found it interesting that this little girl had the same name as the PBS interviewer and CBS morning-show host, but none of the “View” panelists found this “Charlie Rose” coincidence interesting enough to mention it.

Rosie O’Donnell, of course, was once the most infamous member of the “View” cast stemming from her clashes with those who didn’t share her liberal political viewpoints -- most notably co-host Elisabeth Hasselbeck. Rosie’s previous stint on “The View” lasted just one season (September 2006 to May 2007), but it was so electrifying and attention-getting that it drew some of the highest ratings in the show’s history.

On Monday’s premiere, however, Rosie O. attempted to defuse any potential fireworks with the show’s newest rightie, Nicolle Wallace, 42, who worked as director of communications in the White House of George W. Bush, and served as an advisor on the McCain-Palin campaign in 2008 (Wallace was famously portrayed by Sarah Paulson in the HBO movie “Game Change” as the point person for dealing with Palin, who drove everyone crazy).

“So, I am a Republican -- we should get that out of the way, right?” Wallace confessed, almost apologetically, when Goldberg asked her to tell the audience a little bit about herself.

“And I really like her!” interjected Rosie O., perhaps a little too shrilly. “I swear to God! I actually love her!”

Whether it will be a love that will last remains to be seen, particularly as we enter this fall’s contentious election season in earnest over the next few weeks. Wallace herself noted that she learned only 10 days previously that she’d landed this spot on “The View,” which means Rosie O’Donnell has had precious little time in which to fall in love with her. The truth is, Rosie O. barely knows Wallace, and neither does the “View” audience.  But it is clear that the producers of “The View” hired Wallace as their in-house right-winger precisely for her potential to rub Rosie O’Donnell the wrong way. More generally, it is also clear that Wallace will be the show’s resident expert on politics, as she revealed at one point when she astutely analyzed Bill and Hillary Clinton’s high-profile visit to Iowa last weekend.

As for Rosie Perez, 50, she reported that she recently got married, and published a memoir earlier this year with the wordy title “Handbook for an Unpredictable Life: How I Survived Sister Renata and My Crazy Mother, and Still Came Out Smiling (with Great Hair)”. She said she’s “loving life” and declared that “giving back to the world is so important to me!”

“I could go on and on and brag about myself,” she said, “but, you know, I usually like other people to praise me, not to praise myself. It’s a Latin thing!”

It is? Well, for now, we’ll just have to take Rosie Perez’s word for that.

The “View” season premiere started with a “Saturday Night Live”-style “cold open” -- a comedic bit in which the show’s co-hosts lined up to bow before Barbara Walters and kiss her hand to receive her blessing as she sat regally upon a gilded throne.

Among the topics that came up for conversation later in the show were the Ray Rice story (which led to Rosie O’s condemnation of football), and the deaths this past summer of various high-profile celebrities such as Williams and Joan Rivers. Sensitive Rosie O. wept openly as Kristin Chenoweth came on to sing a maudlin song called “Borrowed Angels” (with lyrics such as “They make our lives so blest, so why do they go so soon?”) during a video tribute to Rivers, who was a guest on “The View” 34 times.

The studio audience seemed to love the show, which moved briskly through the hour. About three-quarters into it, they learned that each of them was to receive a free gift -- a smartphone from a company called Huawei, which few had likely ever heard of.

All things considered, it was a solid, smooth start for a show whose revamp seemed to kick into high gear only about two weeks ago.  And love or no love, I predict it won’t be long at all before Rosie O. clashes with Nicolle -- and possibly, everyone else.

On a personal note: I am so pleased to be taking up this daily TV Blog starting today.  I wish to thank and salute my predecessor, the great Ed Martin, whose shoes will be difficult to fill.  But I will do my best. – A.B.