They're Highly Touted, But These Shows Remain Unconvincing 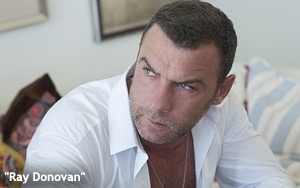 Sometimes when I’m watching TV, I find myself thinking: I’m not buying it.

Maybe I’m an incurable skeptic (a helpful trait when one writes columns about television for a living), but sometimes the storylines and characters that some TV shows expect you to accept on more or less face value don’t quite measure up to the level of acceptance they’re striving for.

Here are three examples of shows a lot of people like, but I’m not buying.

“Ray Donovan”:  Now in the midst of its second season on Showtime, “Ray Donovan” stars Liev Schreiber as the title character. He’s a tough guy originally from South Boston who has relocated to southern California, where he works for a powerful law firm as a “fixer” – i.e., a guy who gets the firm’s famous clients out of various jams before the press gets wind of them.

He’s a charismatic character and Schreiber is great in it. But there’s only one problem: Ray is rarely seen in the show fixing anything. Sure, there have been a handful of situations in the show’s one-and-three-quarter seasons where Ray successfully kept the lid on a potential scandal or two. But this season, his strategy for “fixing” various situations has amounted to little more than confronting various people, scowling at them and then ordering them to cease making a problem for him. And they’re just not listening -- which means this show about a fixer needs to be fixed.

“Sons of Anarchy”: This FX drama series about a northern California motorcycle gang is possibly the most unconvincing show on TV (with the show highlighted below running a close second).

I’m no expert on the real-life organizations on which this fictional motorcycle club is based, but I am convinced that if the real-life clubs were committing mass murders as openly as the “Sons,” they would eventually be shut down even if it took the United States Army to do it.

It’s just two episodes into the new season and the death toll is so high, it isn’t even calculable. At least four people were gunned down in the season premiere Sept. 9, followed a week later by the massacre of untold numbers of Chinese gangsters in what looked like a rural barnyard. And in next week’s episode, at least one more massacre will take place inside a warehouse.

So what’s so unconvincing? That all this mayhem can be committed in broad daylight without a single witness, or more to the point, any individual in a position of law enforcement ever getting wind of the fact that, just a few miles up the highway a bit, some motorcycle gang members ambushed a Chinese gang with high-powered automatic weapons and killed every last one of them? Or they wiped out another group of gang members in a warehouse at a time at midday when, luckily, there wasn’t a single other soul around in the entire vicinity? I’m definitely not buying this.

“Boardwalk Empire”: What’s not to buy here? Well, the impression I have never been able to shake while watching this show -- and I have followed this series avidly from the very beginning -- is the feeling that I’m watching a group of actors pretending to play people from the 1920s.

Yes, I know -- that’s what actors do; they pretend to play other people. That’s true, of course, but they’re supposed to convince you that they are those people. For some reason, when I watch “Boardwalk Empire,” the actors come across to me like they’re just a bunch of people who happen to be dressed in 1920s-style clothing. For reasons I can’t quite articulate, I am almost never convinced that they are actually in the 1920s. Who knows?  Maybe this is why this expensive, high-profile HBO series never does well in the Emmy categories that honor acting, but usually wins an award or two for costumes and set decoration.

For some long-time watchers of “Boardwalk Empire,” including me, the most unconvincing part of the show is -- and always has been -- the lead actor, Steve Buscemi, playing the kingpin of Jazz Age Atlantic City, Nucky Thompson.

It’s not exactly a fresh opinion.  Some critics have been suggesting that Buscemi was all wrong for the role ever since the show began in 2010. Now, as the show heads toward its conclusion in this fifth and final season, I have to admit they’re right.

There is one thing that has almost always bothered me about the Nucky character: Why was everyone so scared of this guy? He looked like the proverbial 98-pound weakling. So how did he come to exert so much power over everyone?

You know what I think? I’m not buying it!

tv
2 comments about "They're Highly Touted, But These Shows Remain Unconvincing".
Check to receive email when comments are posted.
Read more comments >
Next story loading