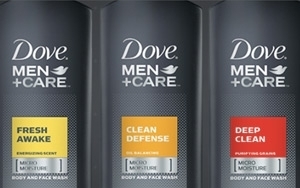 The effort is an elaboration on a retail display campaign in March this year around the NCAA men’s basketball tournament, as Unilever's men's care line were the official products of NCAA locker rooms at this year’s Final Four. The program involved a partnership with the head coach of Virginia Commonwealth University, Shaka Smart with a “Step Up Your Pre-Game” in-store display around Smart's pre-game grooming rituals. The effort featured Dove Men+Care, Axe, Degree Men, Clear Men, Vaseline, and Suave Men.

In a Fall, 2013 report, market research firm Mintel said the men's personal care category grew 15% between 2008 and last year, when total U.S. retail sales reached $3.9 billion. The firm said the market was mostly unaffected by the recession, to the benefit of top players Unilever (33% of the market last year) and P&G (28%). For Unilever, the Dove Men+Care line has had strong growth since it relaunched in 2012. Procter & Gamble has had success with its Old Spice and Gillette brands.

Mintel has a bullish outlook because younger men are more likely to be using a variety of personal care products, including hair styling and facial skincare products. "This bodes well for the future growth of these segments, as it’s likely that younger men will continue to use these products as they age," says the firm in its 2013 report on the sector. "However, it will be a challenge for companies and brands to expand the current market, as men don’t have a strong interest in trying out new products."

Unilever, citing National Football Foundation stats, says 216 million viewers tuned in to watch during the 2012 season, and even more are expected in 2014 with the inaugural College Football Playoff, where the best four teams play in two semifinals in bowl games and a championship game is played in a different city each year.