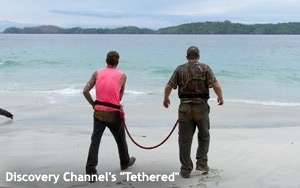 What’s it like to have such a long TV memory? It’s a curse, actually.

Take this week’s announcement from Discovery Channel about a new reality show -- premiering Oct. 5 -- that will have pairs of people trying to survive in the wild while tied together with some kind of six-foot rope.

When the news release about this show, called “Tethered,” appeared in my in-box on Tuesday, I instinctively began racking my brain to dislodge a dim memory of another reality show in which the participants were bound together somehow.

And it finally came to me: The show was called “Chains of Love,” a short-lived series that turned up on the old UPN network in spring 2001. In the premiere episode I reviewed back then, four bachelorettes were bound to a single man, and the premise had them all living together with the intended result being that one of the women would emerge as a love match for the single man.

The only similarity between “Chains of Love” and “Tethered” is the tied-together part. In “Tethered,” the primary goal appears to be survival, not love. In “Tethered,” the pairs have been purposely mismatched in order to create the potential for even more tension and possibly understanding or, at the very least, tolerance.

For example, an ex-Navy man named Keith will be tethered to a free-spirited yoga enthusiast named Willow. The two will be bound together and dropped into a remote, undeveloped area of Panama with just “a basic map and a limited survival kit,” Discovery’s press release said (plus a production crew, we might add). They will then have “10-12 days to overcome the challenging terrain and each other in order to escape the wild and reach rescue,” Discovery said.

Other pairs will have their “Tethered” experiences in locations and climates ranging from a Louisiana bayou to an Alaskan mountain range. Savvy observers of the TV business could have probably guessed that these two locales would figure into this reality show somehow. Thanks to financial incentives put in place by the state governments of Alaska and Louisiana, these locations have been so overrun by reality-TV producers and their crews in recent years that it’s a miracle remote locations can still be found there.

By the same token, it never ceases to amaze those who follow the evolution of reality television (and television generally) that participants can almost always be found who are willing to take part in reality TV shows -- no matter how ludicrous, or in the case of these “survival” shows, rigorous.

That has long been a common question I’ve been asked by people over the years: Why would anyone agree to [fill in blank with] be dropped into a swamp tied to a complete stranger for a TV show, or forage for survival on a TV show while completely naked (“Naked and Afraid,” also on Discovery), or go on “The Jerry Springer Show” to confront a loved one (or former loved one), or solve a parentage dispute via a public paternity suit on “Maury Povich”?

I’ve never come up with a very thoughtful answer to this one, other than this lame explanation: For some reason, some people will jump at the chance to go on TV. While many probably say yes simply to have fun or experience something new, some are deluded enough to think they’ll obtain fame and maybe even fortune from the experience.

But except for achieving some short-lived notoriety among friends, relatives and co-workers (and not necessarily positive notoriety, either), appearing on TV in any of these kinds of contexts has rarely turned out to be life-changing for any of the many people who have agreed to participate in reality TV over the years.

Think about even the longest-running and most-watched reality shows -- “Survivor,” “Big Brother,” “The Amazing Race” (all on CBS); and “American Idol” on Fox, to name a few. Many people watch these shows, but who can remember all but a few of the participants who came and went over the years?

Back when “Chains of Love” came and went in 2001, there was still an ongoing debate about the viability of reality television.  There were fewer such shows in those days, but some of them -- such as “Survivor,” which had its blockbuster premiere in summer 2000 -- seemed like they might have staying power.

At the same time, many other concepts turned up, made a splash and then disappeared -- titles such as “Joe Millionaire,” “Who Wants to Marry a Multimillionaire,” “Man vs. Beast” (featuring such spectacles as a footrace between a human sprinter and a horse) and “Love Cruise,” about a group of young people looking for love aboard a yacht –- a show whose premiere date was the evening of Sept. 11, 2001.

Back then, we all marveled at the lengths that producers and networks would go to attract attention with increasingly bizarre scenarios, and we wondered if reality television was here to stay.  More than a decade later, we don’t wonder about that anymore. Today, it has all become so commonplace.

Two people tied together in the wilderness?  Sure, why not? And if they’re also naked, that’s even better.