From 'A To Z': What's Wrong And Right About TV Comedy 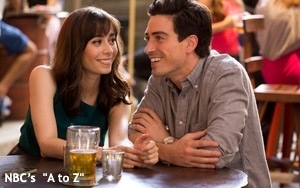 The contrast becomes starkly evident in the very first lines given to the show’s main characters -- lovebirds Andrew (Ben Feldman) and Zelda (Cristin Milioti). He’s a romantic type who works for an online dating service called Wallflower.com. She’s a lawyer whose caseload allows her no time for relationships and dating.

Their subsequent relationship is the basis for the series, which premieres tonight (Thursday, Oct. 2) at 9:30 eastern time. Or as narrator Katey Sagal says twice in the premiere episode: “This television program is the comprehensive account of their relationship, from a to z.”

Andrew’s first lines come when he expresses frustration with the company he’s working for. Complaining that this Web site has shifted its emphasis from love to sex, he laments: “This place used to do real matchmaking. The only things we connect anymore are penises and vaginas!” (I often place exclamation points after TV punchlines -- a habit I probably formed as a youth addicted to Mad magazine, where the practice was then prevalent -- and likely still is.)

These first lines represent the “wrong” in TV comedy. In my experience, no one in real life talks this way. And yet, TV comedy writers frequently give their characters lines like these. For reasons that my therapist and I have yet to unearth (we’re working on it), I have always found this kind of dialogue jarring -- or perhaps more importantly, not funny enough to make the final version of a TV comedy script.

Compare those lines to the first ones we hear uttered by Zelda. We first see her as she enters the Wallflower offices while talking on her cell phone to a person who is somehow involved in a case she is working on. “You can try a child as an adult, but not the other way around!” she says into the phone. “No,” she continues, “it doesn’t matter if the crime’s adorable!”

I found the lines funny. And whether or not others find them funny, they at least come across as more creative than Andrew’s introductory dialogue.

It bears mentioning that a third character in the show fares worst of all when it comes to a piece of dialogue the scriptwriters gave him. The character named Stu (played by Henry Zebrowski), an office colleague of Andrew’s, has this reaction to some information Andrew finds online: “I’m gonna go take a dump!” announces Stu, who at least is not then shown in the act of carrying out this activity. It was a throwaway line that should have been thrown away.

Why mention these distasteful lapses in this show? Because they mar a show that is otherwise pretty good. Andrew and Zelda are likable characters, thanks to the abilities of the show’s two lead actors. (She was last seen in “How I Met Your Mother” and he was in “Mad Men.”) And the contemporary world Andrew and Zelda occupy -- basically an office park in Anywhere, USA -- seems accurately rendered.

Much of the show is clever too. Among other things, we learn that this matchmaking Web site isn’t interested in making matches between people that will last because -- as the driven, female CEO of the company explains -- when people are matched successfully and then go on to have happy lives together, they cease to be customers for the site. Thus, she’ would prefer that the site’s staff come up with ways to drive couples apart right after matching them up (which is what Andrew complains about at the episode’s outset).

In addition, the premiere includes a sudden and surprise cameo appearance by Lea Thompson in a bit about the “Back to the Future” movies -- concerning a particular obsession of Andrew’s.

What else is wrong with the first episode of “A to Z”? The way the episode ends is something that I felt was ill-considered, unnecessary and all-too predictable. But to tell you what that is would spoil the show.

Other than that, the only other thing I could do without on this show -- in addition to the occasionally pungent dialogue -- is the narrator. As happens so often with these network TV shows, narrators are used to explain things we can easily see for ourselves. I detest narrators so much on TV shows that this is the second time I’ve complained about them in a blog post in the last two weeks. On “A to Z,” the narration serves so little purpose that it would not be surprising to learn in Episode Two that she’s been dropped already.

Romantic sitcoms featuring characters who are either 30-something or possibly 20-something and who meet cute and then date are something of a mini-trend in the new fall TV season, including “Selfie” and “Manhattan Love Story” on ABC, and in a few weeks, a sitcom called “Marry Me” on NBC.