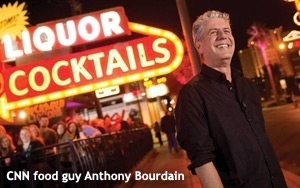 What’s a news channel to do with all those hours when no one’s watching? Fill ’er up with non-news programming, that’s what.

This has long been the strategy at MSNBC, which turns over huge chunks of its airtime to the nation’s prison system with its “Lockup” series and its offshoots -- “Lockup Raw” and “Lockup: Extended Stay” (one of the most hilarious titles on TV, as if a long prison sentence is little more than an “extended stay” at a Marriott).

In the past week or so, CNN’s filler programs have been receiving attention in various stories about CNN President Jeff Zucker. The New York Times did a story assessing CNN under Zucker’s reign, which began in January 2013.

“So far this year, CNN ratings are hovering near 20-year lows,” the story reported. “Average prime-time viewers are down about 6 percent to 176,000, compared with 2013, in the audience that attracts the most revenue for news channels, viewers between the ages of 25 and 54. Total day viewers this year are down 7.6 percent, to 122,000, according to Nielsen.”

The story noted, however, that CNN “earns hundreds of millions of dollars and is on track to have its most profitable year ever.”  That assessment was corroborated in a New York magazine story that reported that CNN would realize a profit of $600 million this year, due mainly to its share of cable subscription fees.

Both stories made sure to mention how CNN has been developing “non-news programming” that Zucker and his team hope will stabilize the network’s viewership or, more to the point, do better than news programming on those days and evenings when there’s no big news story unfolding anywhere in the world (which happens to be the case on most days).

In these stories about CNN, and other stories like them that appear from time to time, much is always made about these alternative programs, as if CNN has suddenly invented a whole genre of TV programming that you might categorize loosely as “other kinds of shows that aren’t news.”

Prominent in all the stories is the show that stars the swashbuckling foodie Anthony Bourdain, who has been traveling the world in search of interesting things to eat for almost a decade, most notably on his Travel Channel series called “No Reservations.”

His CNN show is called “Anthony Bourdain: Parts Unknown.” On this show, he does basically the same thing he’s done on his Travel Channel show -- travel around and eat, while also engaging with colorful locals.

Another CNN show that got some notice last week is a new one that is due to premiere this fall called “Somebody’s Gotta Do It.”  This one stars the affable Mike Rowe, best known as the narrator on “Deadliest Catch” and the host of (and gung-ho participant on) “Dirty Jobs” (both on Discovery Channel).

In this new CNN show, Rowe will be seen traveling around the country visiting “men and women who march to the beat of a different drum,” said a press release from CNN announcing the show. “In each episode, Rowe visits unique individuals and joins them in their respective undertakings [like “Dirty Jobs” perhaps?], paying tribute to innovators, do-gooders, entrepreneurs, collectors [and] fanatics -- people who simply have to do it."

There was also a report making the rounds of another project in the works at CNN, although it was not officially confirmed: A documentary miniseries about the 1970s called “The Seventies.” It’s a followup to the first such documentary series CNN produced and aired that was called “The Sixties.” CNN was apparently pleased with “The Sixties” and now seems bent on pursuing documentaries about the ensuing decades. (While they’re at it, they might consider showcasing some of the preceding decades too -- because if they don’t, they’ll soon run out of decades.)

Here again, recounting the history of various decades isn’t exactly a new idea. On TV, it has been done by networks as varied as VH-1 and National Geographic Channel.

There is nothing particularly wrong with any of these ideas (especially if they bring about the desired result for CNN, which is to prop up sagging time periods). Bourdain is a very entertaining and knowledgeable food-show host. And Mike Rowe is a likable presence wherever he is encountered -- in the flesh, in voice only, or in commercials pitching Viva paper towels.

But these shows -- and others like them that CNN has developed lately -- are ordinary TV shows, the likes of which air everywhere every day. They are largely imitative and derivative of things we’ve seen before. So why should they be expected to draw more viewers to CNN?

Like it or not, CNN is a news channel where people expect to find news when they tune in. Speaking for myself, when I tune in to CNN looking for news, and I find Anthony Bourdain enjoying a meal in a Tokyo restaurant or a White Castle in the Bronx, the only thing to do at such a time is to look for news elsewhere.  And if I want to watch a food show, then I’ll go to the Food Network.