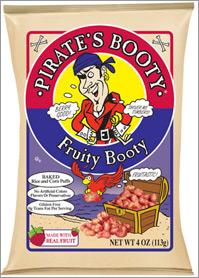 The brand's 40-foot pirate ship float has a treasure hunt theme, including a giant treasure map, and will be manned by an actor playing the Pirate's Booty Pirate, with Crunchy the Parrot in the crow's nest.

The 27-year-old B&G Foods brand will also run a "Share Yarrr Thanksgiving Traditions" sweepstakes (Nov. 5-27), with a grand prize of a trip to New York to watch the parade, with entry through its Facebook page.