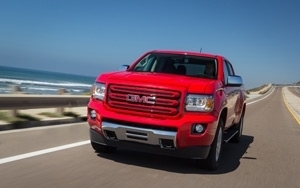 Mid-size trucks are officially back. At a launch event in New York on Tuesday, General Motors' Chevrolet and GMC divisions unveiled their respective pickup trucks, the Colorado and Canyon. The latter will be positioned as the only premium truck in the category

Kenn Bakowski, GMC Canyon marketing manager, says the company is promoting the Canyon right now with a digital and social programs leading up to TV, including online ads, and new website enhancement that includes a digital experience. "It's about what you do, whether you're a camper, biker, or weekend warrior, it's how the truck fits into that lifestyle."

He tells Marketing Daily that there’s something of an inverse relationship, geographically, between where half-ton truck sales rule and where mid-size trucks have traditionally done well. Texas is number one for full-sized haulers and California is a distant second. But California is the leading market for the smaller trucks, which has meant Toyota Tacoma, and to a lesser degree, Nissan Frontier. Until now they have been the only two mid-sized pickups.

And Los Angeles, third behind Dallas and Houston in full-sized trucks, has more mid-size truck registrations than the 48 other mainland states combined, again dominated by the Tacoma, noted Bakowski.

Mid-size trucks were big sellers at one time, but automakers fed huge demand for full-size pickups back when gas was cheap. They had little incentive to focus on smaller, less capacious vehicles. So, while full-size trucks flourished in sales and product development, mid-size trucks languished. Said Tony Johnson, Colorado marketing manager, "Mid-size pickup owners are among the least satisfied people in the automotive world just after compact cars." He added that half of all people who bail out of mid-size pickups don't buy another pickup.

The market limps along versus half-ton pickups, constituting 250,000 vehicles sold per year. Toyota sold 114,729 Tacoma mid-size trucks through September this year. Ironically, that's way more than the 88,869 Tundras it sold. Nissan sold 55,363 Frontiers through September. By contrast, Chevrolet sold 382,153 full-size Silverados in the first nine months this year. And that doesn’t count GMC Sierras. And then there's perennial leader Ford who sells many hundreds of thousands of F-150s every year.

But the potential for mid-sized trucks is big, per Bakowski. He says there are 12.5 million midsize pickups on the road right now, and the only replacement options for people who own them haven't been updated in nearly a decade. GM relinquished its participation in the category in 2012. But "The new Canyon and Colorado now have no relationship to what we offered in the past. And with Tacoma and Frontier both nine years old, we are offering a big list of features not offered anywhere else."

Another attraction for mid-size is people want something that fits in their garage. “So not only are there folks in our [mid-size truck owner] camp, there are also lots folks from full-size trucks." The other pull is price. The Canyon and Colorado nameplates start in low to mid-$20,000.

Thus, says Bakowski, marketing is focused on more urban outdoor-lifestyle-oriented people than farmers and "lineman for the county" types. Los Angeles is such a strong market because, he says, the attractions of the ocean are on one side, and snow is on the other up in places like Big Bear, and haul gear for both. "I will offer product messages to them based on their frame of reference. If you are a full-size owner you have number of features and technologies in [Canyon] where full-size buyers won't have to compromise on amenities, but the fuel economy is big."

Johnson said the company expects 30% of buyers will come from cars and crossovers; 30% from current midsize pickups; and 15% to 20% from full-size truck owners looking for something smaller. He adds that the new line fills out GM's three-truck strategy: full size heavy-duty, full-size light-duty and mid-size.